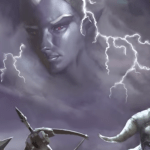 Radiant Damage: The legitimate form of taking religious fervor and turning it into a harmful tool that can be used against the creatures of the undead and the monsters considered to be a part of an unholy nature. Although many spells like Sacred Flame 5e and weapons deal Radiant damage, only two classes truly wield it as a full-blown tool; The Paladin and the Cleric.

Both of these classes can deal Radiant damage against their foes consistently. However, our focus will be mainly on the Cleric for this article, as the spell that will be the central focus of the said article is only capable of being wielded by the Cleric Class; Sacred Flame.

What is Sacred Flame 5e: mechanics and requirements

Flame-like radiance descends on a creature that you can see within range. The target must succeed on a Dexterity saving throw or take 1d8 radiant damage. The target gains no benefit from cover for this saving throw.

Basic Cantrips are an excellent tool for any spellcaster, as the last of a required spell slot allows the player to cast the same spell repeatedly. And with absolutely no worries about managing the spell slot for that particular spell or feeling restricted by it.

Sacred Flame is no different, as the spell is one of the hundreds of Cantrips within Dungeons and Dragons. A Cleric could cast the spell in several repeated instances however they see fit to be able to use it, even though it would see most use in combat encounters.

Damage increases as the player levels up

A common problem with damage-dealing cantrips such as Sacred Flame is that unless the player builds up certain feats and traits around the cantrip, its damage output will eventually become too small to properly use in combat later in the campaign.

Fortunately for Sacred Flame, there is a system in place that prevents this burnout; When the player reaches certain level milestones (5th, 11th, and 17th), the spell damage increases by a d8.

This means that although there will be more potent spells than Sacred Flame that the player character will have the chance to cast and use by the time the damage increases, the spell itself will remain a viable option for combat in case they need to fall back to it.

Lack of required physical material for casting the spell

Physical materials for a Cantrip are typically unheard of, but it is best to understand how significant such a lack of the requirements truly is in spellcasting. Not having to worry about gathering the materials needed to be able to cast the spell helps remove the feeling of feeling limited in exactly what the spell can be used for.

Combining that with the fact that Sacred Flame is a cantrip, and the player with this spell in their spell list truly has no fundamental limitation on how often and frequently they can use it, either in or out of combat.

Target gets no benefits from taking cover

The most exciting and unique condition of this spell is that due to how the spell functions, enemies attempting to gain extra protection from projectiles such as arrows or other ranged spells do not benefit from whatever cover they have placed themselves behind.

This is especially beneficial as this means that unless the target is using a spell or feature that is a part of their stat block that helps them with Dexterity Saving Throws, there is nothing that can protect them from the spell’s damage.

The only real way for them to avoid some of the damage would be if they succeeded in the Dex saving throw required for the target to make. However, even then, they still will take a portion of the damage, though it is up to the Dungeon Master if the damage is halved or negated upon a successful saving throw.

Only one class can use this spell

The most valuable part of any spell is how far it stretches into other spell lists, as having a single spell appear in other lists means that there is a higher chance for the spell to be used by a player when they are making a new character.

However, Sacred Flame is only capable of being used by a Cleric, meaning there is a good chance that players miss this spell and don’t select it unless they have either started their character out as a Cleric or have just multiclassed into it. Although this is an issue in itself, it’s a somewhat confusing one, as this is the type of spell that a Paladin should have been able to use with no problem or requirement to Multiclass into Cleric to be able to do so.

A Dungeon master could allow the Paladin to add it into their spell list, given how it would make sense for most types of Paladins, save the Oathbreaker, to be able to use Sacred Flame as a part of the spells that they have access to.

1. You cannot hide from me, Boy

As stated in the Advantages section, the spell can ignore any form of cover that a hostile creature has placed between themselves and the party. Using this to route out these hiding or protected enemies helps progress the fight overall.

It gives the other party members who rely on ranged combat a chance to focus on more exposed enemies without worrying about maneuvering around to hit the one behind the cover. This can also benefit Melee ranged players such as Fighters or Barbarians, as the spell’s damage could help soften the target and make it easier for them to kill them off once their attacks are made.

Either way, the spell helps route out protected opponents and could even finish them off if their attempts to seek cover were due to a low amount of health remaining in their health pool.

2. May you feel the Wrath of God, Unholy Beast!

The Radiant damage dealt by the spell and many other damage-based spells within the Cleric’s spell list can deal more damage against aberrations within Dungeons and Dragons.

This is primarily seen in battles against demons or other monstrosities with a vulnerability to radiant damage, as they would be unable to protect themselves adequately from the extra damage they’d receive because of said vulnerability.

In addition, since the spell’s damage increases, once the caster reaches levels 5, 11, and 17, the unholy creatures that are being damaged by the spell would take even more damage past that instead of the base 1d8 that would be dealt if the caster was lower than level 5.

Although Sacred Flame is a spell mostly meant for combat encounters, it is still technically fire. As such, the Dungeon Master of a campaign could permit the caster with this spell to use it in place of proper fire at times.

This does include but is most certainly not limited to lighting campfires and/or fireplaces for the warmth and survival requirements one would need a campfire for at a campsite, or in the case of the fireplace, to help warm up a room in a wintery environment. It could also be used to light candles or lanterns to help light up a dark room so the caster and their allies can better see in the dark.

Although the spell itself doesn’t do Fire damage, there is nothing save the rulings of the Dungeon Master that is stopping a player from using Sacred Flame in the same way someone would use a match to light up a standard light source.

The Sacred Flame spell is underrated and overlooked in the various lists the different spell casters have access to. This is mainly because the spell can only be accessed by Clerics, whether a player has chosen to Multiclass into the Cleric Class or started the character out as such.

Either way, it is recommended that a player create a “Holier-than-thou” style Cleric or just a generic healer Cleric picks this spell up as one of their cantrips. The increased damage as they level up, the nature of a Cantrip and the lack of both required spell slots and physical materials needed to be able to cast the spell, and the removal of protection benefits from the cover that the spell manages to pull off all culminate into a beneficial spell.

The Dungeon Master can most definitely rule in favor of allowing the Paladin to use this spell, along with overseeing whether functions of the spell outside of combat can adequately be done. However, it is still a useful tool even if the DM decides against these ideas.

What would the DC for the Dexterity Saving Throw be for Sacred Flame?

For a Cleric, the Dexterity Saving Throw DC would be whatever total comes from combining 8, their Wisdom Modifier, and their Proficiency modifier.

For example, say the Cleric has a Wisdom Modifier of 4 and a Proficiency modifier of 3. Then, the total DC would come up to a 15 for the targeted enemy creature to have to either meet or pass in their own Dex roll to be able to either avoid or take half damage from the spell.

Since the spell is ruled, employing Published Media as not being accurate fire but a radiant light, it can work underwater. However, this is subject to the discretion and personal interpretation of the Dungeon Master, as they could very quickly rule that it does not function in water since it is technically a flame. So be sure to ask your Dm before going through with the use of it in this manner.

What happens when a hostile creature succeeds in the Sacred Flame 5e Dexterity Saving Throw?

This is the most significant subject of interpretation for a Dungeon Master to take when it comes to this spell since there is no official written ruling about what happens should the creature targeted by this spell can succeed in their Dex Saving Throw.

Although I would rule that the creature takes half damage, it is best to properly ask and cover that base before being confronted with that uncertainty without discussing it before the spell is used in combat.