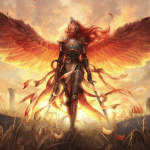 A Paladin has always been described by a single pair of concepts within Dungeons and Dragons since the very creation of the class itself: Their Oaths and the Patrons they made them with.

There are very few Paladins that stray from these concepts, but there is a third one that is as equally important as their oaths, which is their equipment. A Paladin’s armor and weaponry tend to be seen as a part of the Paladin’s being, especially with their power.

As such, this list will mention 12 of these items that are best suited for a Paladin. For the sake of this list, the items listed are primarily meant for high-level Paladin Characters, though lower-level Paladins can use some.

Without the Winged boots, a Paladin would typically take a round or two to close the gap between themselves and an enemy, so they can attack them. With these boots as part of their equipment.

Of course, if the Paladin does get caught in the air when the effect ends. They drop at a rate of 30 ft per round, but one could simply avoid this by keeping low to the ground (about 5 feet or so) and using it to close gaps faster, piece by piece.

Although an essential item, this Ring can help in certain areas where the creatures would use a particular type of elemental damage. True, the Dungeon Master dictates what gem is placed in the Ring and, in turn, decides what element the ring grants resistance to.

Having it, in general, can be an item that helps in the long run. An example would be in an environment where creatures deal extra fire damage toward their targets, but the Ring of resistance would help offset that additional damage if it had a Garnet. This Ring is a helpful tool for particular areas in which a paladin could find themselves.

Created out of one of the strongest elements within Dungeons and Dragons, Adamantine Armor effectively makes the Paladin immune to critical hits against them.

This makes the Paladin one hell of a tank, as even if the monster rolling their attack dice against him managed to roll a Natural 20 against him. The Paladin’s armor negates that, turning it into a regular hit and, in turn, removing the extra damage that would have been dealt otherwise.

9. Amulet of the Devout

The Amulet’s usefulness is mainly dictated by the rarity given to the Paladin, but it can still provide a useful bounty. In contrast, wearing the Amulet, the Paladin’s Spell Attack Rolls, and Saving Throw DCs increase. It even permits the Channel Divinity to feature the Paladin without actually burning away use for it.

This gives the Paladin a hell of an easier time connecting attacks with their spells and making it harder for the Paladin’s foes to succeed against any Saving Throws that need to be made against the spell.

One of the many weapons included in this list, the Sunblade can be a handy tool if the Paladin has an adverse history with Vampiric creatures of the night. Dealing a +2 modifier in pure radiant damage and the attack rolls needed to connect those hits.

This then deals extra damage to vampires; this blade can pack a punch against the lords of the undead while also giving the player wielding this Sword a chance to have a tragic/dark backstory involving these unholy creatures.

With a name like this, the purpose of this Ring is reasonably simple to understand. Regenerating a small piece of health every 10 minutes, this Ring can help keep a Paladin alive after a terrible combat encounter that nearly killed them.

If a limb was lost during the fight, then the Ring can grow the limb back just as quickly, though it will take time for it to return to a state of the full functionality it once had (1d6+1 days). Overall, this Ring’s purpose is to help keep the Paladin alive through any combat encounter, no matter how badly damaged they left it.

The Dancing Sword can be considered the Paladin’s Mjolnir, capable of being thrown and dealing extra damage to a separate target via a bonus action. Such a weapon could allow a duel-wielding Paladin to focus on two particular enemies simultaneously so they can help in combat more effectively than if they were focusing on one enemy at a time.

This Mace, a magical item since the 2nd Edition of DnD, can be quite dangerous when going up against Fiends and Undead, dealing extra radiant damage to them. The Mace can outright destroy them if their health is low enough to do so and they fail the required Saving throw.

On the other hand, suppose they somehow manage to succeed in the saving throw. In that case, they still are frightened of the Paladin wielding the Mace, which gives the player behind them one hell of an ego boost, to say the least, especially when it is a powerful creature that falls within the two affected types.

This Shield can be an excellent partner with the Dancing Sword and/or the Mace of Disruption on the battlefield, as all it takes to use it is a single bonus action.

For example, remaining in front of the Paladin for a minute, one could use their second bonus action to throw the Dancing Sword and attack one enemy while using the Mace of Disruption to focus on another enemy ahead of them.

This trio of weaponry can be incredibly devastating with a higher level Paladin who can perfectly balance their uses of these items within two of their turns.

The Corpse Slayer is one of the few magical weapons that allow a wider selection of weapons to be classed as this, as opposed to being restricted as a sword. Besides that, this weapon can deal extra damage against Undead foes and makes the undead target have disadvantages on effects that would turn undead.

This can be especially useful if a party happens to have a second paladin as part of the group, or a Cleric that happens to hate the undead, thus promoting cooperation between party members during combat.

The definite article of Sword when someone thinks of a Paladin, this Sword can be an amazing tool against all sorts of unholy creatures, from Undead to Fiendish entities.

Dealing extra damage to these creatures, a +3 bonus modifier to attack/damage rolls, and even giving off a magical aura that grants an advantage on spell-saving throws can make this weapon incredibly powerful. Even more so if the Paladin wielding it reaches level 17, as the range of the aura triples in size.

As the final item on this list, the Cloak of Displacement is simple to understand but holds a large amount of power. Unless an attack manages to get through and hits you, any attacks against the player wearing this cloak will have the disadvantage of favoring the player.

This can make hitting a Paladin with a 20+ AC even more difficult for strong enemies who can deal a great heap of damage while also protecting the Paladin even further than just the shields and armor they happen to have.

Overall, the items that a Paladin can utilize throughout their campaign adventures are incredibly powerful against Fiends, the Undead, and other untold horrors to plague the land. As such, a Dungeon Master should be capable of throwing entire undead hordes against the party. The Paladin among them would be able to stand tall, hold firm, and take down all of their foes without any issues especially if they decided to grab one or more of the items listed above.