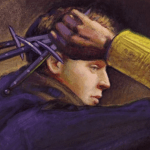 Throughout any campaign, a player will inevitably find some Magic Item that can be used during a campaign. These Magic Items can range from weapons such as swords and war hammers to wondrous items that are miscellaneous items like tankards or pens.

This list will go for the 12 best magic items a Dungeon master can give a player anywhere between levels 1 and 5.

This small glass bottle seems to live up to its name as it is constantly bellowing out a silver smoke that can help hide a group of people or cause a pretty good distraction in a pinch. Unfortunately, however, there aren’t many people who could benefit from it, save for the Rogue.

However, that’s only an immediate 60-foot usage, as leaving it open for longer could expand the range of the smoke to a whopping 240 feet, making it a good cover for other classes besides the stealthy Rouge.

The Nature’s Mantle is a relatively uncommon item for a Dungeon Master to give out to their players, as only Druids or Rangers could use it. This cloak allows the player to hide as a bonus action and as a spellcasting focus for the previously mentioned classes.

This can be useful for any ranger who wishes to keep themselves hands-free of items or weapons for whatever reason they may need. Overall an exciting item that doesn’t get used that often.

Another uncommon item to see a Dungeon Master hand out to a player, Glamerweave gives the player a single advantage in a Performance or Persuasion check a day. However, the main use for this item is mainly for flavor in social interactions.

It promotes creative descriptions of appearance from the player, as they could have themselves covered in ice or have spouts of fire coming from the cloak to make themselves a more flamboyant person in the campaign.

9. Pipes of the Sewers

If anyone wanted to recreate the Pied Piper, this would be the item for them, even if it gets outclassed rather quickly. This item allows a player to summon a hoard of rats to aid them in combat, showing the player how certain abilities or spells that bring in additional allies to help fight combat encounters can greatly benefit.

However, as previously mentioned, this item can get outclassed fairly quickly by other magical items that can summon stronger allies than the rats or spells capable of the same thing.

Either way, these pipes are a great way to introduce summoning to newer players of DnD while also giving the player a fun and creative outlet through the rats and how they act.

The functionality of this item is fundamental; A standard weapon with an extra point in damage and attack rolls. Although these items are prevalent to find in a campaign, as some Dungeon masters could toss these items out like candy bars, using a +1 weapon can change how a fight is handled.

These weapons can pretty much be any of the standard simple or martial weaponry within DnD, meaning that a player could find one to their liking incredibly easily. The +1 weapon finally introduces enchanted weapons to new players, so they can see the benefits of using those weapons over the standard ones they may have started the campaign with.

Although climbing is not often used in a campaign as a mechanic, these potions can help make climbing attempts easier upon consumption. Allowing characters to scale climbable surfaces regardless of their Athletics score enable any player to get somewhere without an issue.

Even if their athletics score would have typically made it a nearly impossible task for them. It also helps that the potion is reasonably cheap, allowing players to stockpile it for future use.

While this is a no-brainer for any leveled character to grab while they have the chance, a low-level character definitely should grab a potion of healing while they can, in case they find themselves in a situation where they need to regain hit points quickly.

Now, if the party has a spell caster with spells such as Cure Wounds, these potions do become less of a focus on a person’s mind. However, even with such a spell caster, having any rarity of this potion can help in a pinch.

This wand acts effectively like the spell does typically when cast by a spellcaster capable of using it, with the staff recharging once every dawn. Although it seemed to copy one of the most used spells a wizard can have in their cantrips: this wand can be of great use when placed in a party that doesn’t have any spellcasters that can use it.

This can also give some players the idea to multiclass into spellcasting classes if it means being able to cast such a spell freely without any need to wait on recharge to be able to do it again.

The Alchemy Jug; An item that isn’t seen that often but does have its uses. While it doesn’t hold any standard combat usefulness, players who have it do have the potential to be able to use it in creative ways by simply naming a liquid and then pouring it out of the Jug as an action.

As such, this can provide a wide range of drinks for the party to enjoy during any downtime, but it can also help solve any puzzles that require a certain liquid to be utilized in a dungeon. So, the Jug can be useful if the Dungeon Master allows the players to get creative with it.

If anyone wants to channel their inner Zeus, this weapon is the perfect addition to one’s inventory. The Bolt of Lightning that this item can produce once a day is capable of one-shotting many enemies thrown at a player during the lower levels of experience. Still, even when the party is at the higher levels can, this javelin pack is quite a punch.

This weapon also provides the player who has it a unique feeling towards the weapon, as the images associated with the Javelin can make the item feel impressive enough for the player to enjoy having it around. Furthermore, since the damage output can be quite useful paired with other spells, the Javelin doesn’t outlive its usefulness sheerly because it exists, making it capable of being used by a player throughout a whole campaign.

A surprisingly underrated item, the Immovable Rod is a utilitarian tool that can be used for many different things should the player who owns the item decide to think outside the box with its uses.

For example, the Rod could hold open doors or gates that would automatically close behind the party upon entering or help support the weight of a collapsing ceiling above the party since it can withstand 8,000 pounds of pressure.

The Rod could even assist in vertical movements before any other means of flight or vertical travel could be achieved, or it could also help prevent falling damage. Overall a handy item when placed in the hands of a creative player who is ready and willing to make anything happen with this Rod.

As the top item on this list, the Bag of Holding can be an impressive item to have and one that is commonly given out early by a Dungeon Master to one, if not all, party members. Since this item can hold up to 500 pounds of stuff at a time while itself only weighing a mere fraction of that, it can easily be the answer to over exuberance issues within a party.

There are many instances where a player or party with a Bag of Holding can easily make it through the rest of the campaign without worrying about being weighed down by all of the loot they are finding along the way.

Although the items listed above are placed in order of personal preference for players between levels 1 and 5, I think they are incredibly useful for any new player to get a hold of. Regardless of where items are placed on the list, it is wise for Dungeon masters to think about giving players these items early in the game.

Especially when magic items such as those could save their hides one day or help them in a situation that otherwise would have ended poorly if not for their magic item.