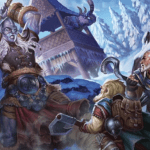 Builds within Dungeons and Dragons are always a topic of conversation within the community. There are different ways to mix and match various feats, abilities, racial traits, and classes to make each playstyle unique to each player who comes up with these.

However, the ones listed here are a slight drop in the ocean of those that can exist, thanks to the people who put in the time to make these overpowered builds a reality.

Being called a Tank within the party holds a sort of honor that comes with such a distinction. Any player like this has built their Character to have the highest Health Pool and the Highest AC, regardless of their damage output. However, the Super Tank Build can put a player on the fast track for such a task:

Going with the Totem of the Bear for the Barbarian and using the Wild Shape ability of the Druid, a Player with this Build could get a Health Pool that surpasses the 100 range if their Rages are spaced out effectively.

Although not technically possible until the player has put 8 Levels into Druid, they could turn into a Dire Wolf to give themselves a max health of 296, with an AC of 14 being an above-average AC for such a build. This would effectively be another tank build but would require more time than the previously mentioned Build.

10. Pact of the Blade Variant Human

Choosing Pact of the Blade for a Warlock is rather strange, given how there are better Melee classes. However, choosing Variant Human and making the Build properly can trap opponents. By selecting Sentinal and Polearm Master as feats from the Variant Human, they have Devil Sight, Eldritch Smite, or either Thirsting Blade or Improved Pact Weapon (2 Attacks or +1 on attacks) as the Invocations.

Additionally, they have a Polearm as the player’s primary weapon. The Character could utilize all of these together to keep enemies from being able to get away from you while they are in melee range and keep more dangerous enemies away while they are within the player’s range.

9. Any Flying Race, Regardless of Class

Races such as Aarakokra and Flying Tieflings (Should the player choose this variant) can be broken in terms of combat simply by remaining as a ranged combatant.

So, although the title states that regardless of class, Players choosing Classes such as Warlock or Ranger could pick off melee-based enemies in the air without the targets being able to hit them back.

Of course, this build can be easily countered by Ranged enemies, such as archers or spellcasters. Still, your Character could easily be the bane of Melee fighters throughout a campaign very quickly with the right choice of race.

The abilities of the Echo Knight give any player that chooses to follow that archetype a boost in their Constitution score, which, when mixed with races that also increase Strength or Con, such as Earth Genasi, Half-Orcs, or Goliaths, can give them a lot of health.

It also allows them to dish out high amounts of damage for the early game without worrying about their health, as the player has to stay 30 feet back and let the Echo do their two to six attacks for them. Mix Great Weapon Fighting and either a Maul or a Greatsword, and you have a simple process for killing enemies.

By making this Build, a Player could utilize Crossbow Expert and Loading Infusion to count it as being mounted. In addition, the Shield absorbing elements and the player’s pet using their reactions makes the player quite the tank. This simple Build also gives the player advantage on Wisdom checks to ensure that the player remains in control of their Loading Infusion.

Walking around with a 24 AC, thanks to the combination of abilities and an advantage on Saving Throws, makes your Character not only incredibly difficult to hit but more than capable of succeeding in saving throws that could help reduce any damage that happens to go through their armor.

This section was called “The Almighty Zeus” because of the multiclass between The Order of Scribes Wizard and the Tempest Cleric due to how these classes work together.

The Order of Scribes Wizard allows for modifying the damage type of spells used to a different spell’s damage type of the same level. For example, one could utilize high-damage Wizard Spells and then change them to one of the many Tempest Cleric Lightning/Thunder spells to create powerful spells without sacrificing the spellcasting ability of the Character.

As a multiclass selection, the combination of Order Cleric and Evocation Wizard tends to aim toward triggering your allies into attacking nearby enemies. By utilizing the Shatter spell on an ally next to an enemy in the middle of a combat encounter.

The Ally can auto-succeed in the savings needed for the spell and thus takes no damage. However, since the Ally was a target of the spell, they could use their reaction to attack the enemy next to them, thus giving them a free attack during combat.

Although on their own, the Goodberry Druid and the Life Domain Cleric can use their own separate features for healing themselves, combining the two in a multiclass system allows a player to combine these features to create an even stronger healing factor.

For example, the Berries used by the Druid via the Goodberry spell normally heal only 1 Hit Point per berry and only create ten berries per casting of the spell. However, by factoring in the Life Domain Cleric’s Disciple of Life feature, the healing increases up to 4 per berry, thanks to the 2+spell level addition from Disciple of Life.

This makes the spell capable of healing 40 HP per casting, which can bump up as the levels get higher.

An incredibly frequent problem that players can tend to come across easily is that there is a heavy limitation on combat options for non-magical martial weapon users.

As a person could just run up to the enemy of their choice and hack and slash, with few other options as to what to do to the enemy. By taking levels into the Battlemaster Fighter and the Swashbuckler Rouge, a player can avoid this problem by using sneak attacks and cunning actions from the Rouge, along with Battle Maneuvers from the Fighter. All these things combined give the player a wider range of options to choose from during combat, thus keeping fighting from getting stale.

The Coffeelock is a Multiclass option between Warlock and Sorcerer that takes advantage of the Warlock’s ability to regain spell slots from short rests and the sorcerer’s ability to change Sorcery points into extra spell slots to create an interesting system.

By taking the Aspect of the Moon Eldritch Invocation, players can rid themselves of the need to sleep and constantly take short rests. They could have an unlimited number of spell slots to utilize on a theoretical level, even if a certain interpretation of the rules regarding these abilities can quickly stop this build.

There are many, many builds that a player can choose during the character creation process and beyond to suit their idea for their Character best. However, the multiclass builds listed in this short list contained many classes. It is highly encouraged for players to experiment with new ideas and turn the game into their ball of clay, highly malleable, with the only thing limiting what they can do with it being their creativity and imagination.