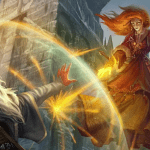 Paladins have a lot of exciting and underused spells in their arsenal. Destructive Wave in the 5th edition of Dungeons and Dragons is one of them. I think it is the best level 5 damage spell a Paladin can get.

In this guide, our expert DM (Justin) will tell you all his tips & tricks and help your Paladin get the most out of Destructive Wave in your next campaign.

What is Destructive Wave 5e

As you see, you only need the verbal component for this spell. So you won’t need any materials or somatic components to use Destructive Wave. All you need to be able to do is have the ability to make audible noises to say the magic. For some reason, you do not need a somatic component, even though the description says that you strike the ground.

When you say the incantation, you create a burst of divine energy by striking the ground. Choose targets within 30 feet of yourself. These creatures are forced to take a CON saving throw.

What makes Destructive Wave so good?

There are a ton of factors that make this evocation spell for Paladin so good. Let’s break it down into pieces:

Finishing off Mobs and minions

The most apparent and best use for destructive Wave is to clear out a bunch of enemies that are rushing you or have surrounded you. It is also a great spell to knock minions of the bosses prone and give your team a massive advantage.

Remember, you can choose any creatures – without a maximum – that you deal damage to in a radius of 30 feet. This radius includes the air and the ground.

Helping your fighter out

If you have a Bard that is optimized for support? Then you can use Destructive Wave to knock as many of your opponents prone. This way, your fighter can deal massive melee damage on his next turn. Doing this is especially useful if the fighter has multiple attacks in turn or has had a bonus damage buff from a spell-like Holy Weapon.

While Paladins only have access to Destructive Wave on level 17, when they unlock their fifth spell slot, two other builts can significantly benefit from this damaging attack.

With the Magical Secret feature, bards can get this damage spell at level 10. Another class that can use Destructive Wave is a Tempest Domain Cleric. This class can cast the attack the earliest, starting at level 9.

If you are looking for a solution to massive hoards spawned by Animate undead or the evil legions of zombies brought forth by Finger of Death, Destructive Wave might be just the spell you need.

This AOE magic does not just hit every creature you choose in a radius of 30 feet around you (ground and air) but can also knock them prone if they fail their CON save. Another significant aspect is that you only need a verbal component to cast Destructive Wave.

While Destructive Wave is one of the best damage spells for a Paladin, getting it takes quite a while. If you enjoy playing other unconventional builds like the Tempest Domain Cleric, you can already get access to it at level 9.

Does Destructive Wave hit your allies?

No, you don’t hit your allies (unless you choose to) with the spell. However, the description of Destructive Wave clearly states that you choose the targets you want to hit yourself.

Can you hit targets in the air or ground with Destructive Wave?

Yes, the description says that you can hit monsters in a radius of 30 feet. This radius includes the air and (unless your DM says otherwise) the (soft) ground. So you can hit both a Peryton in the air, the Giant Poisonous snake in the tree, and the Ice Elemental burrowing under the snow.

Is Destructive Wave a good spell for a Paladin built?

From a damage perspective, Destructive Wave is one of the best spells you can choose to buff your Paladin. If your DM loves to send out bosses with tonnes of minions or enjoys trying to overwhelm you with hordes of creatures, this AOE magic can help you tremendously.