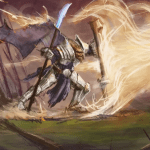 Masters of magical songs and brilliantly charming bards speak their way in and out of disastrous situations. They can inspire their allies with a song or hinder their foes with carefully woven insults. Bards can have a variety of origins and goals, while their skills focus on charisma and music. Here are some great options listed from good-best:

Sage is a background best suited for the college of lore bards, as a sage spends years learning and collecting the lore of the multiverse. This background does not offer many benefits to other types of bards.

However, it grants proficiency in the arcana and history skills. Both are knowledge skills that a college of lore bard should have and will benefit from. With the amount of study a sage undergoes, you also learn two additional languages of your choice and gain the researcher feature, which grants the sage the knowledge of where and how to best obtain a piece of lore or expertise.

The equipment of the sage is needed for an excellent lore keeper. It includes a bottle of ink, a quill, a small knife, a letter with an unanswered question, a set of common clothes, and 10 gold. The sage background is not generally good for most bards, but it benefits the few colleges of lore bards.

Being born into the comforts of wealth and political power can allow one to pursue music and develop exceptional charisma. With this background, a bard’s careless and naive actions can be explained. The noble experience grants you proficiency in history and persuasion skills.

History is not an especially great skill, but it is helpful for the college of lore bards. Persuasion proficiency is a must-have skill for any bard with great charisma and roleplay. You also gain proficiency with a chosen gaming set, this proficiency is fun, but it does not add much to the class. With these proficiencies, you gain one additional language and a bunch of noble’s equipment.

The equipment includes a set of fine clothes, a signet ring, a scroll of pedigree, and a purse containing 25 gold coins. The noble background has a knight variant, but for the bard class, the feature granted by the base noble is more valuable than the retainers of the knight variant.

The Position of Privilege feature of the noble background allows you access to high society and grants you some support from common folk due to your noble past/present. The noble offers some decent skills for the bard and a helpful feature.

The charlatan background is a natural fit for bards. The ability to read people like books and use your charisma to gain their trust is precisely what bards do. In addition, the background offers proficiency in deception and sleight-of-hand skills.

Deception is a charisma skill making it a good option for bards, but with the addition of the sleight of hand proficiency, they can be combined to steal and fool many unsuspecting folks. You also gain proficiency with the disguise and forgery kits, furthering your ability to lie and deceive.

The set of equipment granted by the background includes a set of fine clothes, a disguise kit, a signet ring, 15 gold, and tools of conning (e.g., weighted dice). False Identity allows the bard access to documentation and disguises a false identity. The charlatan is a fun background choice and can work well with most bards, especially the morally ambiguous ones.

Being abandoned and having to grow up on the streets alone can teach a character to be more stealthy and charismatic, to get away with stealing or charming their way into some food. A bard could have picked up instruments along the way and learned to effectively steal from the common folk.

This background grants proficiency in stealth, sleight-of-hand skills, and the disguise kit and thrives’ tools. These proficiencies are excellent for most bards, but bards who specialize in stealth can use them best.

The disguise kit used, along with the bard’s charisma, can lead to very sneaky escapes or break-ins. The equipment of this background is not very useful, but it can only deepen the character’s lore. It includes a small knife, a map of your city, a pet mouse, a token of your parents, a set of everyday clothes, and 10 gold coins.

The City Secrets feature is handy for a rogue-like bard. Your experience living in the streets allows you to know the patterns of cities and thus know where to find passages most others would miss. The urchin background is more rogue-focused, but the benefits work for any type of bard, with sneaky bards gaining the best use.

Bards often form communities where they play music or travel together. A faction or guild could be full of bards or contain a bard division. Either way, the faction agent’s background can work with the bard’s background but can be a bit restricting. It grants you proficiency with insight and one of the mental skills (Charisma, wisdom, and intelligence).

Insight is nice to have on the board, and the choice of cognitive skill is beneficial, allowing you to choose from many valuable skills depending on what type of bard you are. You also learn two additional languages, a good bonus for bards who run their tongues without much care.

Along with these, you also gain the faction’s equipment, a badge/emblem of the section, a copy of seminal faction text, a set of common clothes, and 15 gold. Additionally, being part of a faction allows you access to private networks of supporters who can assist on your journeys in many forms. Finally, while faction agent is less customizable than other backgrounds, the proficiencies and languages gained are excellent and allow different types of bards to benefit from them.

Due to the unique skillset of the bards, your charisma could have landed you a position in court as an advisor to a king or noble. Even if your service has finished, your relations can be helpful too. This background grants you proficiency in two-face skills, insight, and persuasion.

Persuasion is good for bards with their high charisma. Insight can also be helpful, but less so. Both of these skills are most used in roleplay, and this background also gives you two chosen languages to use. The equipment includes a set of fine clothes and five gold.

The Court Functionary feature granted by this background allows access to records and the court’s inner workings. Courtier is a fine choice for the bard, but its court-centered backstory can restrict the bard’s story.

A bard with a long history of criminal activity can be an intriguing and fun concept for a bard. Many bards in other stories follow the path of crime and charm. This background grants proficiency in deception and stealth skills.

Deception is exceptional for a tricky bard with high charisma. On the other hand, stealth can work on the bard, but it is best used for a stealth/dexterity-focused bard. You also gain proficiency with a chosen gaming set and thieves’ tools.

The bard can use the gaming set for some fun roleplay or betting, but the thieves’ tools are needed for an excellent criminal bard.

Finally, the Criminal Contact feature allows you to use your previous connection to find other criminals in the local area. The criminal is a fantastic background, even with the lack of languages for any bard, but stealth bards can use it best.

Naturally, bards are great entertainers with excellent musical instrument skills and charming personalities. What good is a bard if they can’t entertain a drunken tavern or inspire their party through hard times? The entertainer background grants proficiency in acrobatics and performance, which capitalize on a bard’s ability scores, dexterity, and charisma.

The background equipment reflects that of the bard, a musical instrument, a love letter or a similar item, a costume, and 15 gold. The feature given by the background can be used very well with the bard’s abilities, but it often lacks actual use.

The feature By Popular Demand grants you access to places you can perform in, taverns, inns, circuses, etc. This background feels like it was made for the bard, as most of its benefits match it.