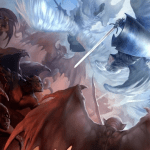 Ability Scores are a fundamental part of the Character Creation Process, as this determines many aspects of a player character’s abilities within a Campaign. From how much health they have to how strong is their spellcasting ability, these Ability Scores hold the most significant importance to how the Character is created, only bested by the Player Character’s Class and Background.

Of course, throughout any campaign, Ability Score Saving Throws will be made, one way or another, to test the Character’s capabilities and to determine if they would succeed in something.

This List of most common throws uses a Google Spreadsheet made by u/TemplarsBane on r/DnD on Reddit as a reference for the topics here, based on their findings and creation of the Spreadsheet.

Charisma, by far, is the rarest Saving Throw ever used within any Campaign in Dungeons and Dragons, and it’s pretty clear to see why once you look deeper into the reasons behind it.

There are only 19 Spells that can trigger a Saving Throw for Charisma, which is one more than the Intelligence Saving Throw, which will be discussed later. However, unlike Intelligence, the Saving Throws for Charisma is mainly used for Major Status Effects, like being Banished from a Plane of Existence or becoming Dominated by a Hostile Creature.

Other, more negligible consequences follow behind Charisma Saving Throws, most recognizably the Zone of Truth, which prevents a person from lying while they are in the zone and the spell is active. Any time outside of these Saving Throws that Charisma is called upon, it’s mostly for ability checks rather than saving throws,

Despite Intelligence being the ability score with the most skills attached to it, only being tied with Wisdom, Intelligence Saving Throws are rarely called upon by anything, but just a bit more than Charisma Saving Throws.

Unlike the Charisma Saving Throw, however, only 18 different spells force the player to make said Intelligence Saving Throw, with the Majority of these spells being either Damage focused or Major Status Effect Focused.

These Status Effects could range from a direct reduction of a player’s stats to even being able to drive the player’s Character insane from the adverse effects of the spell. The Intelligence Saving Throw is also perfect against Mind Flayers, as a decent amount of their abilities center around spells requiring these saves to determine if they hit.

While a few things will warrant a Strength Saving Throw, there are far more than Intelligence and Charisma combined, hence its place on the List as the halfway point for said List.

The number of Spells that can trigger a Strength Saving Throw skyrockets into the triple digits, where the remaining spells on this List will be in terms of numbers from here on out. The main difference between these four, starting with Strength, is the rising number of these spells and what their distribution mainly focuses on as a desired effect from a failed Saving Throw.

In this case, most of the 104 spells that cause Strength Saving Throws are considered Minor Conditions within DnD. This means that Conditions such as being Grappled, knocked Pronely, and Restrained are all conditions that require a Strength Saving throw to combat against them.

Strength Saving Throws marks the end to where Minor conditions and Status effects will be a majority in the grand scheme of things and where the more common Saving Throws begin to show what can be possible when being put in these situations.

Wisdom Saving Throws marks the start of the “Major” Saving Throws, as this and the following two entries into the List are the most common ones to be seen, with each having their unique distribution among spells and the effects that trigger them.

The Wisdom Saves, as they stand, are mainly used to prevent the more dangerous status effects and conditions from inflicting themselves upon the player, with Domination and Paralysis, to name a couple.

Even though the significant Status Effects can cause a player who fails them to miss entire turns in combat to these spells, the Majority of the spells that require Wisdom Saving Throws are Minor Conditions.

Furthermore, these are across the board rather than a few specific ones, so a player could quickly become Blinded, Deafened, Charmed, or even Frightened, just to name a few. So, suppose the Wisdom Saving Throw doesn’t cause a player character to miss a turn in combat upon failure.

In that case, it at least reduces what the player character can do during combat, either being unable to move from where they are standing, being unable to see the area around them, or even being made to be scared of the caster of the spell.

Interestingly enough, out of all the Saving throws in this second half of the List, Wisdom Saves prevent the least amount of Damage.

Only 9 of the spells require a Wisdom Saving Throw to reduce or prevent some type of Damage being dealt to the player.

With Constitution being the primary source of a Player’s Health, it is no surprise that the Saving Throws involved are the second most common within Dungeons and Dragons. Given what Constitution is used for, it makes sense that the Majority of the over 200 different spells that exist are using the Constitution Saving Throw for spell effects that would cause Damage to the player’s Character.

Not only that, but the spell distribution between the different status effects is relatively well-balanced, with Minor Status Effects being the outlying cause for a Constitution Saving Throw.

Constitution Saving throws are also triggered whenever a player’s spell requires Concentration, making these checks even more common than the others mentioned thus far.

As the final point to discuss on this List, Dexterity Saving Throws are considered the most common Saving Throw to be made, with only a few spells behind the total of spells that trigger them the capacity that causes Constitution Saving Throws, as previously mentioned.

Like Strength Saving Throws, Dexterity ones are mainly started to prevent Damage being dealt against the player during a combat encounter, with this Ability Score having the most in this category out of any other.

Not only that, but because of the higher number of Saving Throws that can be done to prevent Damage, this also means that the other spells that cause different status effects have a higher chance of driving one. However, it is not as balanced as Constitution or Wisdom on this List’s reference sheet.

With all of the spells within Dungeons and Dragons, all of them have a chance to trigger an Ability Score Saving Throw to combat whatever negative status effect it may have against the targeted player.

Ranging from direct Damage to Conditions and Status Effects, these Saving Throws are always essential to succeed and prevent the enemy within any combat encounter from gaining the upper hand in battle.

As it has been shown, some Saving Throws have more of a focus on specific effects being reduced or deflected, as others are more balanced in what spell effects cause the Saving Throw to be required.