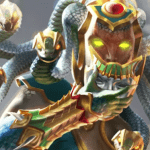 Born with innate magical originating from many sources, the sorcerer wields and alters magic in many ways to achieve goals. The source of their magic makes each sorcerer vastly different from the last.

Aside from their magical prowess, sorcerers are charismatic. This quality can be seen in the background choice. These are some great background options listed from good-best:

Anyone, especially divine soul sorcerers, can serve gods and pantheons. The acolyte background grants proficiency in insight and religion skills. Religion is not greatly useful to most sorcerers, but to a divine one, it is better used.

Insight is also part of the sorcerer’s skill list and is a much-needed proficiency no matter what kind of sorcerer you make. The background also grants two additional languages. The acolyte’s equipment includes:

This equipment is generally useless to the sorcerer class but can be used for a character quality. The Shelter of the Faithful feature of the acolyte can be instrumental in any class, especially on the sorcerer with their ability to communicate magically with people across vast distances.

The feature allows you to take Shelter or gain assistance from supporters of your religion/faith. The background restricts the character to be religious in some way and provides some mostly applicable proficiencies.

A family of natural-born sorcerers can quickly rise to nobility and among the ranks of kings with their high charisma and valuable capabilities. The noble background grants you proficiency in history and persuasion skills.

History is powerful on sorcerers, but persuasion proficiency is helpful with the sorcerer’s high charisma. It is also in the sorcerer’s skill list. You also gain ability with a chosen gaming set.

This proficiency does not add much to the class. With these proficiencies, you gain one additional language and a bunch of noble’s equipment. The equipment includes a set of fine clothes, a signet ring, a scroll of pedigree, and a purse containing 25 gold coins.

The noble grants the Position of Privilege feature, which allows you access to high society and grants you some support from common folk due to your nobility. This background can be used well with the sorcerer, but the history proficiency is not generally excellent.

Having good charisma does reading and using people very quickly for many sorcerers, but not all choose to go down this path. The charlatan background grants proficiency in the skills of deception and sleight of hand and the disguise and forgery kit.

While sorcerers don’t often have great dexterity, combining these proficiencies with their high charisma for the deception skill can make up for the lack of dexterity.

This background does not offer any languages, unlike most others. The set of equipment granted by the environment includes a set of fine clothes, a disguise kit, a signet ring, 15 gold, and tools of conning (e.g., weighted dice).

The feature False Identity gives the sorcerer a second, fake identity with established official documentation and contact which. With many valuable proficiencies and the false identity feature, this background offers functional skills for sorcerers on the wrong side of the law.

As a sorcerer, you could have sought adventure and joined a guild in which a master artisan guided you until you became a master. The guild artisan background grants proficiency with insight and persuasion skills and a chosen type of artisan’s tools. Insight and persuasion are both in the sorcerer’s skill list and can prove helpful for roleplay, especially for highly charismatic sorcerers.

However, the artisan’s tools proficiency is wasted on the sorcerer. You also gain an additional language of choice and the guild artisan’s equipment, including a set of tools, a set of traveler’s clothes, and 15 gold coins. This equipment is not notable, but it contains a good amount of starting gold.

The feature of the guild artisan, Guild Membership, works very similarly to the acolyte’s and faction agent’s features. Your guild will offer assistance whenever possible, but unlike the other features, you have to pay a price of 5 gold per month to remain in the guild. The guild artisan offers good proficiencies. However, the cost of membership and the artisan’s tools proficiencies bring its usefulness down.

With the sorcerers’ high charisma and innate magic, finding themselves as an assistant/advisor to a noble or king is difficult. The courtier background grants proficiency with insight and persuasion skills.

Both are part of the sorcerer’s skill list and are good in combination with the charisma of the sorcerer. It also offers two additional languages of choice and a set of fine clothes, and five gold coins. The Court Functionary feature granted by this background allows you access to records and the court’s inner workings.

Courtier is a great choice for the sorcerer, with its good proficiencies, two languages, and useful feature, but the equipment is quite empty in both gold and tools.

Your faction could be your family or a group of similarly powered sorcerers. The faction agent background grants proficiency in the insight skill and a chosen mental skill (Charisma, wisdom, and intelligence). Insight is by itself a strong skill to have and part of the sorcerer’s skill list, and the addition of a chosen mental skill is great, allowing you to choose one of the charisma skills you need.

You also learn two extra chosen languages and gain the faction agent’s equipment, a badge/emblem of the faction, a copy of seminal faction text, a set of common clothes, and 15 gold. This equipment is nothing special but helps build the identity of the character.

The feature Safe Haven granted by the background allows you access to secret networks of supporters who can assist you and your companions when needed. With a great choice of skill proficiencies and two languages, this background is a simple and good choice for the sorcerer.