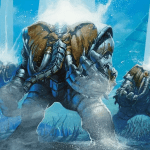 The Loxodon is not commonly used as a Player Character Species within a campaign. A Loxodon is a Bipedal Elephant, capable of communication and other interactions in the same manner Humans are, though with their own unique traits and abilities, with their Trunk, Serenity, and Powerful Build being chief among them.

As such, when creating a character for a campaign, a player would have to consider these abilities when choosing the class they wish to play as for a campaign. This list will go from the worst to best classes for the Loxodon Player Race.

As will be the case with many early additions to the list, the Artificer Class would require a high Intelligence Score to properly utilize it in any given campaign.

With the Loxodon’s Ability Score and Saving Throw Proficiencies being mainly in Constitution and Wisdom, the Artificer would just end up being a sheer waste of time to build a Loxodon Character around.

The Wizard, in the exact same light as the Artificer, requires a good Intelligence Ability Score to be a viable option for any player to use efficiently. As such, the reasoning as to why this and Artificer were not clumped in the same position as is the case with the next entry in the list is thanks to the Natural Armor the Loxodon has.

The Artificer naturally has slightly more health than the Wizard does, meaning that a Wizard Loxodon would be able to appreciate the added protection from their Natural Armor more than the Artificer would.

The Warlock and the Sorcerer share this exact same spot in the list for the reason that has come to be a familiar one so far throughout this list; lack of a good starting Ability Score.

Unlike with the Wizard and the Artificer however, these two classes require a sufficient Charisma Ability Score as opposed to a good Intelligence Ability Score, making these two non-viable options for starting out as a Loxodon Character.

The Rouge is the last in the “lack of a sufficient ability score” boat on this list, as the Loxodon Player would need a better Dexterity than what the Loxodon normally would have when starting out.

However, unlike the previous entries on the list, there is a slight bit more to this situation; The Loxodon Race offers nothing to the Rogue class outside of their Loxodon Serenity and additional points into Constitution, which gives the player advantage on saving throws against the Charmed and Frightened Conditions.

Other than that, it just would not make entirely too much sense for a 7 ft.+ Elephant to be trying to sneak around an area that would be much easier for a much smaller player race to be able to pull off.

The Paladin is where the focus on a lack of Ability Scores to start out with ends, as from here on, the shortcomings of the Classes can be built around through certain builds, as opposed to the previous entries that would become too much of a hassle to be able to try such a grueling effort for.

Although Wisdom is not exactly an Ability Score that a Paladin would really have to focus on when being built up for the future. A Player who could decide for the character to go with a Strength Build could ignore the Dexterity Ability Score thanks to the Loxodon’s Natural Armor. They could in turn focus on improving their Strength and Charisma, which would impact their melee damage and their spell casting ability respectively.

In a situation akin to the Paladin, the Fighter is a class that does not entirely focus on Wisdom, though depending on whether the player decides to use the Fighter Class through a Dexterity Build or a Strength Build, the Player Race’s traits make this a more viable option.

With the extra points in Constitution giving them a higher Health Pool and their Loxodon Serenity giving them the previously mentioned advantage to the Charmed and Frightened Condition Saving Throws, playing as a Loxodon Fighter is a tiny bit more possible than a Loxodon Paladin.

The Monk, which surprisingly is an interesting choice for a Loxodon, is able to benefit from the natural abilities and features of the player race better than the previously mentioned additions to the list are able to.

Regardless of the Subclass chosen for the Monk, the Class as a whole is able to take advantage of the additional points into Constitution and Wisdom, along with the Serenity giving its own additional buff as previously mentioned.

Of course, an easy choice to make if someone is wanting to be more aggressive with the Loxodon, the Barbarian is in the same boat as the Monk Class that was just mentioned, for a similar set of reasons.

The Barbarian’s Unarmored Defense is better than the Loxodon’s Natural Armor, canceling it out in the same way it does for the Monk, but the Barbarian is more of a Strength Class than anything else, so it would not be able to benefit from the Dexterity as much as the Monk can, regardless of whether the Lodoxon had anything to increase their Dex or not.

However, with the added Constitution, along with the other unique features from the Loxodon Race, a player could make the Barbarian a useful class to choose for their character, though it wouldn’t be as strong as it would be with other species that are more suited for such a class.

The last Class to have more negatives brought about the option that positives, the Bard suffers from similar problems to the two previously mentioned classes that had been added to the list.

Thankfully, the Natural Armor does help the bard live with their incredibly low Health Pool, even with the additional two points into the Bard’s Constitution Ability Score. Having all of these things working together helps the Bard overall focus less on their survivability and more on Charisma when setting up the character, so then they are more of a useful Bard when the campaign is actually taking place.

Here is where things begin to really kick off as good options for the Loxodon, as this class can take advantage of both the additional points to Constitution and Wisdom like the Monk can, though this class can take things a little bit further than the Monk actually can, depending on the build a player chooses to go for with the Ranger.

Since Ranged Weapons normally utilize Dexterity, a player could make a Dex Build to focus on that and in turn ignore the Natural Armor feature given to the player since said player would be more likely to wear armor than if they had a lower Dex.

However, with a Strength Build for the Ranger, a player could easily just ignore Dex and rely on the Natural Armor instead, though this is similar to many of the other classes mentioned in the past. The only reason why this class is further down the list than the others is because the builds focusing on these two things are more powerful with the Loxodon in this class than the ones mentioned earlier.

The Cleric’s Ability Score Distribution is rather fitting for the Loxodon Player Race, since the Cleric normally relies on Wisdom for their Spells. Not only that, but the Constitution does help with the survivability of the player a little bit more than if they did not have the extra points into that specific ability score.

Although most Clerics come with a Heavy Armor Proficiency that would rule out Natural Armor rather quickly, the Loxodon Serenity would help make the Cleric just a little bit more of a tank to help the party with their healing needs when the tough stuff hit the fan.

The absolutely best class for the Loxodon, the Druid takes the points that the Cleric earned through its near-perfect set up and goes a little further. Unlike the Cleric and its Armor proficiency, the Druid actually struggles greatly to have a high Armor Class to assist with building up their survivability in a Combat Encounter.

However, the Natural Armor Feature and the additional points into Constitution covers this base for the Druid easily, allowing them to focus on their Wisdom Ability Score, which also sees a slight boost to its total thanks to the Loxodon’s increases in that ability score.

The Loxodon, like many other Playable Races within Dungeons and Dragons, is a unique species that has its own unique pros and cons that come along with choosing the race for a Player Character.

In turn, the Loxodon fits better into some classes over others, as all races do when it comes to trying to determine what class is best for them to choose and play as for any duration of a campaign.

Of course, nothing is stopping a player from multiclassing into more than one of the classes listed above, as this list solely focused on pure class selections over multiclass options, but it is always wise to take all of the features and capabilities of any Player Race into consideration when deciding the Class said Character will be placed into.