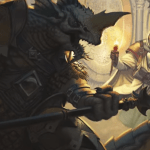 If you want to find allies, get good deals and find useful information, it is vital to pick the most useful languages Pathfinder offers. Not just as a player, but as a Dungeon Master, you should carefully consider which tongues are spoken where and by whom.

A world that makes linguistic sense and communicating with the local fauna and flora is important for roleplaying and getting the most out of a campaign. In this article, we will discuss the most useful languages to pick in Pathfinder and why they are so helpful to know.

Here are the criteria we use:

Keep in mind that how useful a language is also depends on your campaign, your DM, where you are, and how much fun you can have with it. Therefore, the list is as objective as possible but will still have quite a bit of language that you will never have to use if your DM doesn’t put them in the campaign. While you are here, check out our ranking on best style feats in pathfinder for your character!

Aquan and other primordial languages

Putting Aquan – and the other primordial Languages – this high on the list might be controversial. However, I am pretty sure a lot of players will agree that these languages are underrated and tremendously useful. Knowing just one of these will allow you to understand quite a lot of other related (primordial) languages and give you the ability to communicate with a wide range of creatures.

If your DM enjoys sending you on adventures through ruins and far away places that lay in wait to be explored, then Ancient Azlanti is an awesome pathfinder language. You will encounter this tongue in the Pathfinder Adventure modules more than you might think.

In a regular campaign, it is also great to know. There still are a myriad of ruins waiting to be explored and a staggering amount of scrolls and texts filled to the brim with useful information to be read. From a linguistic standpoint knowing Ancient Azlanti is also a good idea as it relates to Polyglot, Taldane, Hallit, and Varisian.

Abyssal has claimed the third spot on our list of most useful languages in Pathfinder. This language is one of the best to know if you are about to embark on an adventure filled with demons, devils, and daemons. There are also quite a few other races that know Abyssal as their second or third language.

Besides being useful to communicate with demons, you can also interact with oni and other evil spirits from the Tian Xia region. Because demons can pop up everywhere and often meddle in affairs, knowing abyssal is a great idea.

A language closely related to abyssal and almost just as useful is the infernal language. Knowing this language is often useful since the speakers can pop up everywhere and anytime in a high-fantasy campaign.

Infernal is the lingua franca of Hell, and everyone who deals with Hell and carries out affairs related to it is at least somewhat fluent in the tongue. So if your DM is sending you to Hell, Infernal is one of the top tongues to have mastered.

Tip: check out the best buff spells in pathfinder for your character!

If you aren’t going to be involved with evil-doers and demons, then you might want to consider adding Celestial to the languages you know. The Celestial Language in Pathfinder is a great option if you are going to interact with benevolent races. Some of the most well-known speakers of celestial are Angles.

The Celestial Language is similar to both Sylvan and Draconic. However, it is a bit more high-pitched than those two. Knowing Celestial is often a great boost for any good-aligned party, as angles and other celestials are often willing to aid in some way when vanquishing evil.

If you have an unquenchable thirst for knowledge, then knowing Ancient Osirion is a big benefit. Osiriani speaks Osirion, a descendent people of an ancient civilization that is known for its culture and wealth.

Quite a few scholars and those in the higher ranks of society are at least somewhat familiar with the language, making it a fantastic but unconventional language to pick in Pathfinder. If you enjoy exploring ancient ruins and old temples, then the knowledge of ancient osirion will undoubtedly be handy.

One of the great races in the world of Pathfinder is the elves. These creatures are close to humans and often come into contact with them. As a result, they have vast civilizations and long life spans.

Knowing elven language is always a good idea as it is one of the oldest languages of mortals in Golarion. Due to the age of the language, there are many ruins, temples, and un(re)discovered places where there are writing in (proto) Elven scripts.

Elfs are also often encountered during adventures and are, in many cases, willing to help those that took the effort to learn their language and customs. In addition, Elven has a lot of vocab from Celestial and Draconic. So even if you are not able to speak those two languages, you might get the general gist of conversations and texts.

If there is one word how you can describe draconic, it would be old. The Draconic language is one of the oldest languages and has had an influence on as good as every language in existence. Knowing Draconic will unravel ancient texts and secrets and allow you to speak with draconic creatures and all those related to them.

Check out the best feats for a bard if you want to do potent bardic performances in Draconic!

Number 9 on our list of most useful languages in Pathfinder is the Tien language. The Tian people speak this complex language. It is the most spoken language in the regions around the Imperial Lung Wa. The language is very widely spread in those regions and is the de facto common in that part of the world.

Even if you are not traveling to Imperial Lung Wa, it is a very useful pathfinder language to master as there are often travelers and merchants from that part of the world in other regions.

Let’s close off our list with a pretty underrated but fantastic language in Pathfinder you should choose. Undercommon is the most spoken language in the region, referred to as the darklands. The tongue finds its origin in the Elven Language. The language is mostly spoken by the drow and their races and cultures.

Knowing under common – depending on the campaign and region – is a massive benefit to the party and your roleplaying. You will be able to read texts, eavesdrop on interesting convos and converse with many monsters like Crystal Dragons and Akrida.

The most obvious pick for the most useful languages in Pathfinder is Common. We didn’t want to put it at number one – or on the list – because it is so obvious that you should be able to speak it. Common is the most commonly spoken language (duh) in the game. We put it in the honorable mention slot to ensure you don’t make a character that cannot speak common.

Did we miss a fantastic or underrated language that should be included here? Let us know, and we will add it if you give some good arguments to do so! In the meanwhile, make sure you check out our other Pathfinder articles to get the most out of your character!