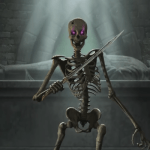 Every living creature’s life ends and remains at rest at its final destination. The Gentle Repose 5e spell offers clerics and wizards to help the departing be put at rest without disturbance. Through this, no malicious creature can disturb others, making their way to eternity.

What is Gentle Repose 5e: mechanics and requirements

You touch a corpse or other remains. For the duration, the target is protected from decay and can’t become undead.

The spell also effectively extends the time limit on raising the target from the dead, since days spent under the influence of this spell don’t count against the time limit of spells such as raise dead.

1. Preventing or Starting an Undead Apocalypse

Whether you are of good or evil alignment, the Gentle Repose spell is essential for a necromancer’s spellbook. On the one hand, this spell can help you stop evildoers from raising an undead army with the corpses of their victims. But on the other hand, you can even create your undead army!

Having the Gentle Repose spell accompanied by the Revivify and/or Raise Dead spell, you are given a 10-day duration to slowly but surely raise your army while assuring that your undead creatures are in decent condition.

You may have a fellow party member or even a dear friend you’ve met along the way who desires to end their journey with eternal peace. However, they may not desire immortality or eternal life on the Material Plane.

With the Gentle Repose spell, the target has a 10-day duration to not be affected by any spell that may awaken it or break down over time.

This allows the caster and their party enough time to prepare a proper burial for the dearly departed so they can be left untouched in the meantime.

This spell acts as a magical form of refrigeration, which is useful if you want to study the remains of the dead and figure out how to use it. Who knows? You might be the next Dr. Frankenstein!

Are you an aspiring mortician or graveyard keeper? Well, the Gentle Repose spell is for you if you are looking for something that does the job of preserving the remains of your customer’s dearly beloved.

With the Gentle Repose spell, you can prevent the corpse from decaying, which makes it easier for you to doll up the corpse for its upcoming funeral. So, you can keep it practically refrigerated and secured for 10 days giving you plenty of time to plan for your next event!

The Gentle Repose spell is a necromancy spell that preserves a corpse, preventing it from decaying and allowing it to be raised from the dead later. Necromancers and other evil spellcasters often use the spell to create an undead army.

Still, good-aligned characters can also use it to give their allies time to prepare for a resurrection. The spell is considered a ritual, so it takes longer to cast than a typical spell and requires specific components, such as a pinch of salt and a sprig of rosemary. Nevertheless, the Gentle Repose spell is great if you’re looking for a spell to fit a necromancer character.

Can the Revivify spell be used on a body under the effects of the Gentle Repose spell?

Yes, it technically works. For example, if the spellcaster casts the Gentle Repose spell within one minute (which in combat is ten rounds), then using the Revivify spell on the corpse would still work. However, it’s important to note that this will only work on a corpse that has not died of old age.

What happens if Gentle Repose was cast on a creature immediately after a Finger of Death spell killed them?

Under those conditions, the Gentle Repose spell would prevent the creature from zombification. This will only work if the spell is cast before the turn of the caster of the Finger of Death spell.

Can the Gentle Repose spell work on the undead?

No, because according to the spell’s description, the spell only works on corpses and bodily remains. Thus, the spellcaster cannot use the spell on undead creatures such as zombies, liches, vampires, etc.