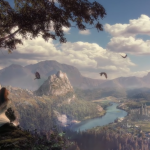 Plant spells in Dungeons and Dragons (D&D) can be a powerful tool for players, allowing them to manipulate and control the natural world around them. These spells often involve manipulating and controlling plants, such as creating thorns, growing vines, and even summoning elementals made of wood.

Plant spells can be especially useful for characters specializing in nature magic, such as druids and rangers. But also, any other class with access to spellcasting, like wizard or bard, can use these spells. They can be used for various purposes, such as providing cover, trapping enemies, and even healing allies. With the right combination of plant spells, a player can turn the natural world into a powerful ally on the battlefield.

Below are the best plant spells from the Player’s Handbook 5th Edition.

The Transport via Plants spells is an impressive 6th-level conjuration spell that lets you move to different areas through plants. This potent spell allows the spellcaster to move to any other area on the plane of existence they’re in. So if you and your party member want to move to the next continent or another nation, this spell can do that for you for the duration you are given.

Amid battle or an incursion, the Wall of Thorns spell can create a barrier to protect and fend off foes. Given its offensive and defensive properties, the wall makes good coverage of up to 60 ft of length and height.

Even if creatures attempt to climb over the fence, they would have to take the risk of potentially receiving 7d8 piercing damage. This is excellent crowd control if a swarm of mobs is overrunning you.

Have you ever found yourself stuck in a session? Have you been lost in your tracks upon your journey? Or do you need some assistance? Well, the Speak with Plants spell is for you! Through this, spell bards, druids, and rangers can give plants limited sentience and animation.

Like the name of the spell, this means you would be more than able to communicate with the plants around you. From asking it questions to giving it commands, this can be useful in helping you move your party along their adventure.

The Spike Growth spell is the perfect natural trap and ward for enemies, beasts, and so on. Druids and rangers can create dangerous spikes and thorns that grow from the ground.

Entangle is a spell that can be cast by a druid or ranger whenever you need to keep a hold of your enemies from doing their worst. The spell creates an area of thick and thorny vegetation in a 20-foot square within range.

Any creature that enters or starts its turn in the area must make a Strength saving throw or become restrained by the entangling plants. A creature can also use its action to make a Strength check to free itself. The entangle spell is a good way for a druid or ranger to control an area, providing cover for allies and hindering enemies.

If ever you find yourself and your party on a quest to find a valuable plant or animal, the Locate Animals or Plants spell can help you get a head start on tracking down one. If you have a description or name of the plant or animal, that is enough for Mother Nature to show you her way.

However, it’s best to remember that this spell is best if you’re looking for an animal or plant of that kind rather than a specific individual. So, if you’re searching for your lost plant pet, you may not have the best of luck.

The Plant Growth spell, as described, has both “immediate” and “long-term” use for the beholder of the spell. Whether you want to create an overgrowth to slow down your enemies or create abundance and growth upon the land, the Plant Growth spell gives you two options for utilizing this spell. The Plant Growth spell offers a lot of versatility to benefit you, your party, your journey, and even the people you’ve met along the way.

The Goodberry spell is a reliable spell that gives the essentials in healing the spellcaster and other party members. Given the ability to create up to 10 of these berries, as a spellcaster, you can distribute them how you may restore your and your fellow party member’s health.

Moreover, these berries also provide sustenance for the day, so you won’t have to worry about dehydration or starvation. Indeed, the Goodberry spell is essential for almost every druid and even range to have in their spellbooks!

Dimension door but with trees, the Tree Stride spell gives a spellcaster up to 500 ft of travel distance. To add to that, once you step into the chosen tree, you will be able to know trees like it within the range for you to decide where to come out of. Though this is quite a good escape route for a spellcaster, it has things to consider, such as finding a live tree that matches your size and assuring you will be the only one able to enter it.

As a cantrip and an attack spell, the Thorn Whip cantrip offers bards, druids, and rangers to strike against with its long, vine-like whip covered in thorns. Unlike a regular whip, this allows the spellcaster to have a more extended range of 30 ft, upcast in damage in later levels, and even pull in your enemies by 10 ft. As a result, the Thorn Whip cantrip makes for an excellent spell for beginners and low-level characters.

Plant spells in Dungeons and Dragons can be valuable to any character’s spellcasting arsenal. They offer a wide range of options for players, from entangling enemies to healing allies. These spells can also add a unique flavor to a campaign, as they allow players to interact with and control the natural world in ways that other types of spells cannot.

It is important to remember that while plant spells can be powerful, they are often limited in scope and may not be effective against certain types of creatures or in certain environments. Players should also be aware that these spells often have limited duration and may require maintaining concentration.

In conclusion, Plant spells can be a useful tool for players in D&D to control and manipulate the natural world, providing many benefits on the battlefield. Still, it’s important to use them strategically and be mindful of their limitations.