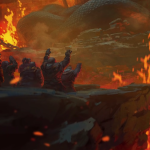 Description: You regain 4d4 + 4 hit points when you drink this potion. The potion’s red liquid glimmers when agitated.

What is a Greater Healing Potion?

The greater healing potion is a powerful magical item in the Dungeons and Dragons (D&D) universe. It is a potion that, when consumed, restores a significant amount of hit points to the character drinking it. Greater healing potions are often highly sought after by party members. They can be found in treasure hoards, purchased from merchants, or obtained as a reward for completing a quest or mission. These potions are specially crafted by skilled alchemists, magicians, or divine spellcasters, with rare ingredients and require specialized knowledge to create.

When used in combat, a greater healing potion can be the difference between life and death for a character. It can also restore hit points lost outside combat, allowing characters to recover more quickly from injuries or illnesses. They can also help revive a fallen comrade and bring them back from the brink of death. Also, it could be an important tool for dungeon exploration, allowing the party to continue their journey without retreating and resting.

A greater healing potion is a powerful asset in a player’s hands. It can provide a tactical advantage in combat and save a character’s life in a dire situation. For a dungeon master, including a greater healing potion in a game can add an element of strategy and tension, as players must weigh the benefits of using the potion against the potential risks.

How do you use a Greater Healing Potion?

Below are four ways to use the greater healing potion for your party’s benefit.

2. A Bargain with Death

3. After a Short Rest

Where can you find Greater Healing Potion?

Here are six possible locations where the party could find a greater healing potion in the campaign!

In an ancient ruin, the area is filled with potion ingredients and brewing equipment and lies a greater healing potion. Perhaps, the ruins are remnants of an abandoned alchemy laboratory. However, within the ruins, there are dangerous creatures that call it home.

A sacred shrine dedicated to a deity of Healing is an aura of serenity and purity. A statue of the deity of Healing stands looking down upon the party. It is almost like there is life within their eyes. The greater healing potion can be obtained as a blessing or reward from giving an offering to the statue, cleaning up the shrine, and whatever may satisfy the deity.

May the party track down a great spell caster for knowledge and answers. What lies within their abode may be great secrets. A powerful spellcaster’s study, where the potion can be found among their research and possessions.

Under a grand city lies a dark secret, an underground black market that deals in rare and powerful magical items. Adventurers can find an assortment of illegal goods, including the greater healing potion. The party members must not be caught or exposed working with the underground market, so they must be careful of who they trust.

A dragon’s hoard is found within the mountains high above, filled with great riches from wandering adventurers and vulnerable villages. The greater healing potion can be found among treasures and valuables, but be warned that if anything is taken, the party will wreak the dragon’s fiery rage.

Shops that may specialize in certain kinds of magical items may be scattered in a bustling city. For example, the greater healing potion can be purchased in a potion shop for a high price. The players may have to persuade the shopkeeper for a better price or take a more sinister route and steal it.

In conclusion, the greater healing potion is a versatile and valuable item in the world of D&D. It can be used to provide powerful Healing in combat, help characters recover from injuries and illnesses, and even bring fallen comrades back from the brink of death. The potion can be found in various locations, from ancient ruins and sacred groves to underground markets and dragon hoards. It can also be crafted by skilled spellcasters, adding an element of adventure and discovery to the game.

The greater healing potion can add an interesting dynamic to a D&D game, as players must weigh its benefits against the potential risks of losing it. The potion can also be used as a bargaining tool or a reward for completing a quest or mission.

Overall, the greater healing potion is a powerful magical item that can greatly enhance the gaming experience for both players and dungeon masters. It provides a sense of strategy and tension and distinguishes between success and failure in a D&D campaign. As a result, it’s a valuable item to have in any adventure.

How long does it take for an artificer to craft a healing potion?

About Xanathar’s Guide to Everything, it typically takes an artificer around 10 hours to craft a greater healing potion since it’s an uncommon potion.