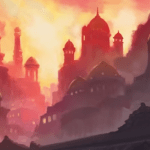 With the hustle and bustle of this hectic city, it seems easy to get away with a lot- stealing, poisoning, the whole ordeal. No one would bat an eye or even bother to help with how much things were going on at one time, along with the crowds of people going to their next destination.

What happens, though, if dangerous creatures were lurking in the allies or even living among the masses? How much would people care, then? This guide is taking a long-awaited deep dive into city and town encounters in 5e DND!

What Should I Expect in City and Town Encounters 5e?

A city or town encounter in almost every scenario usually involves an NPC to get things started. Are they the ones who summoned the creature? Are they the creature’s master? Or maybe this is a non-combat encounter that has somehow impacted the city.

That being said, when setting up encounters such as these, it’s essential to add a humane factor into it, such as motives (ex: revenge), moral barriers (ex: will try to refrain from killing children), and a coverup to avoid suspicion.

On the occasions that the encounters do not have NPC involvement, it can be an attack from a horde of monsters or a natural disaster. However, those encounters are usually for higher leveled parties since there’s a lot of preparation and fighting needed to get into those. If required, it is possible to lower the levels of the creatures or adjust the encounter for lower levels.

The difference between city and town layouts is quite different since the possible encounters differ between the two areas. Besides the apparent components- environment and location- demographic is extremely important when laying out a city or town.

How wealthy is the area? What kind of resources can be found here? What does the city/town have to offer? Once these things are determined, the encounters that can be implemented can be much more immersive.

I consider towns and villages interchangeable when it comes to encounters. Both are somewhat rural and are not the most technologically advanced. Due to that, defenses, military, or anything of the sort won’t be very enforced here (although they may have weapons and weak defenses to keep out creatures that linger around the land).

Towns and villages usually have social norms implemented throughout the town’s generations. That being said, encounters are generally easier to set up in cities since they are typically open to attacks and raids. They may be set up near a mountain, a forest, or anywhere danger lingers.

Make sure to figure out some essential NPCs, geography, and social norms/history of this little town. This will help the DM brainstorm what kind of encounters can be implemented in said town. The key, of course, will always be prepared.

Below are a few examples of some Town layouts.

When thinking about the geography and set up of cities for encounters, I tend to think of them as mini-kingdoms. They would have more demographics, economy, technological advancement, and defenses.

I wouldn’t recommend making complex encounters in cities unless you, the DM, are comfortable with the city the players are in and know enough details to execute it.

Since cities are usually more protected than towns or villages, it would be more difficult for monsters or groups of people alike to raid them. For instance, cities usually have borders and walls with many guards around them because cities are much more established than small towns or villages.

Therefore, if anything were to infiltrate the city, it would need to be planned and/or extremely powerful.

Below are a couple of encounters that can be implemented in Cities.

The Dnd books and online homebrews give many NPC options and monsters controlled by NPCs or even monsters that can potentially be NPCs. That being said, the flexibility and resources make up for the slight difficulty of making encounters in cities and towns. The books also show a bit of lore about the creatures which can be made and possibly segway into even more encounters for world-building.

As stated, the most common encounters within towns and cities involve NPCs who are somewhat on the front or ordering monsters to do their dirty work. Since most groups will start in towns or cities, it’s best to use these encounters to build up lore and have them progress through the story.

It’s also straightforward to adjust the difficulty of these encounters to fit the party’s levels and capabilities within reason. For example, if the party finds itself in the noble territory, it will make sense for that specific area to have more reinforcements.

On the other hand, if the party finds itself in an area filled with poverty, it would make sense that more people would be on edge, but there would also be fewer reinforcements. When creating the encounter, try to think of how NPCs in the area would respond to danger and/or potential dangers.

My Favorite City and Town Encounters!

Since most parties come across parties or cities one way or another, encounters in these areas can be relatively common.

However, my most current campaign’s party prefers to stay in the cities/towns for most sessions, so I have to think of a handful of encounters while they are there just to make the sessions more exciting and have them feel obliged to explore elsewhere. So, here are some encounters that I think are worthwhile!

As the party arrives at the village, they are immediately captured and accused of killing one of the families living there.

As the mayor gives his speech, the bells begin to ring, and people start to run. In the distance, a horde of dragons can be seen flying toward the city, attacking everything that can be seen.

On the surface, the entire town is ruined and vacant. Not a soul in sight besides a few beasts and undead. As the party progresses through the town, they notice that there seem to be arrows and shapes engraved onto debris around the town. It leads to a well with a ladder going down…

Panic is beginning to spread within the city as word that a group of cannibals is eating people at night. The middle and lower class try to buy their safety into noble territory for protection.

A village full of undead skeletons, zombies, etc., but none of them are hostile. On the contrary, they treat guests with hospitality as if they were still alive.

It is soon revealed that this town is cursed and all the undead were once people who lived there. They are in constant pain and wish to be released into the afterlife.

Here’s a list of some of the creatures/NPCs that I usually implement into city and town encounters. All of them can be found in the Monster Manual book since it holds a lot of resources for creatures that can be used in this setting. Enjoy!

Conclusion on top City and Town encounters in 5e DnD

One way or another, the party will most likely come across a town, city, or village in their travels. They may even start in one. Since there are many possibilities and resources given within the community and books alike, it should be easy enough to set up the encounters depending on your group’s levels.

Of course, it’s also important if you want the party to gain some levels, progress through the story, and/or simply give the party something to do for some excitement. As always, it’s always about what the DM wants out of the encounter.