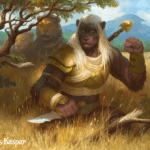 Many races exist in Dungeons and Dragons that are each better suited for some classes than others. The Leonin Race, a conscious group of Lion people, are no different from this description, as even they have certain classes that they benefit most from as opposed to others.

This List will go through those different options, with the List being organized from the worst options to the best ones. For the sake of discrepancy, this List is based on the assumption that the reader is not using the “Customizing Your Origin” option that was added from Tasha’s Cauldron of Everything and/or the updated version of the Race from Mordenkainen’s Monsters of the Multiverse.

The List also does not consider any Ability Score gains from any Background that could be selected, as the primary focus is on the Race and the Classes that can be selected within the Base Rules Published Media.

The Leonin class doesn’t add anything unique to the artificer as opposed to other races throughout Dungeons and Dragons that do. The Intelligence Increase that normally comes from selecting this class is not an option for the Leonin race, as nothing would change or be improved upon if it was taken. This will be a running theme for a good amount of the classes further down the List.

Although gaining proficiency in Intimidation is nice, it is not enough to work off of for a bard alone. A player wanting to double down with the Bard Class could attempt to go with becoming a Valor Bard, but to be able to pull it off properly, they would need at least a 14 in their Dexterity, along with good Charisma, Strength, and Constitution Scores when making the character. This can be very difficult to achieve through most available character-creation methods, making this process rather frustrating if someone goes for it.

Even though the sheer idea of an Anthropomorphic Druid of any Architype is a cool idea on paper, the sad reality is that the Leonin and the Ability Score increases that the Race has simply do not support the usage of this class. In addition, the Strength and Constitution Ability Score increases do not match the normal ability scores best used for Druid, which are Intelligence and Wisdom.

As a part of the previously mentioned running theme that was brought up near the beginning of the List and has been seen in a couple of classes already, the Ability Score increases for Leonin do not help the Monk Class, which focuses on Dex and Wisdom. However, even with that placed aside, a Strength-based Monk is simply not viable, as many of the Monk’s abilities are based on the previously mentioned ability scores it runs on.

The Leonin, although befitting the rouge-like nature of a feline, does not bring anything to the table to benefit from using the class or any of its archetypes. It is simply not meant for Stealth in this regard unless a player wants to make an antithesis to the Rogue class by making their character the complete opposite of a Rouge without choosing another class other than Rogue.

These two had been placed on the List to save space within the List for the remaining Classes because their situation is the same. Both classes rely on Charisma for their spell-casting ability. As such, they are completely non-viable for a Leonin player to take up, as their natural ability score increases don’t benefit it. There isn’t anything that innate benefits the Leonin Race on its own through either class.

This class is the final completely non-viable class in the lineup of remaining DnD Classes; The Wizard’s reliance on Intelligence for its spellcasting is simply not possible for a Leonin to benefit from properly. However, even through all that, the Leonin is more built for strength and constitution, which we will be getting into.

The Ranger Class bridges the previously mentioned non-viable classes and those best suited for Leonin Players. Although the standard way of setting up a ranger within Dungeons and Dragons is simply not possible for a Leonin, Strength builds is technically possible within the parameters of the class. However, making a strength-based Ranger Build is incredibly difficult, but it is still possible.

Although the Fighter and the Barbarian are more acceptable options for a Leonin than the Paladin, such an option is acceptable and very much doable for someone to pull off. Charisma does normally help a Paladin out within a campaign.

It is not a 1st level increase required to make a proper build for the class, unlike several of the previously mentioned ones earlier in the List. The Ability Score increase into Strength and Constitution helps the Paladin class just fine. The option to select Perception as one of the skill choices from what the Leonin Race can choose is not something the Paladin class can pick, helping out the Player in that regard as well.

Finally, the dependence on fear effects from the Oath of Conquests makes it an interesting choice for a player, as the Daunting Roar can help in that regard. This is why the Paladin is a far better choice than the Cleric. Although a player could attempt a similar mindset when making a Leonin Cleric, it is far better and easier to go with the Paladin instead.

Any strength build that the Player can make through the Fighter Class is more than capable of being produced with a Leonin as the Race behind it; With its increase in Strength and Constitution being the main reasons behind such an option.

In addition, of course, the other Racial Proficiency options that the Leonin can choose from (Athletics, Perception, Intimidation, or Survival) are all staples for several builds that a player can manufacture for the Fighter Class.

The Barbarian class fits Leonin perfectly compared to all other classes. The Ability Score increases not only fit the Barbarian like a glove but also any options for the Racial Ability Proficency options.

Not only that but the Claws that the Leonin work greatly as an unarmed weapon for the player character, even though a proper weapon is preferred.

A Daunting Roar is a great tool for crowd control, which for normal Barbarians is a rather difficult problem for the class to tackle with other races that do not have the same ability.

The biggest issue between all the classes as to what makes the most viable options for this Race is the ability score increases from the Race. Also, ability proficiencies that can be chosen from the Race are not at all workable or standardly viable for a player to use the class effectively.

Even though the List of Classes best suited for the Leonin Race area is a small portion of the available base rule classes, nothing stops a player from choosing any of those classes for their character.

This List is also more based on the original rules for the Leonin Race. Some Dungeon Masters either do not properly know how to or do not wish to utilize the rules for Tasha’s Cauldron of Everything and the Mordenkainen’s Monsters of the Multiverse for one reason or another.

Despite that, the Players can even use Homebrew classes that are even more suited for the Leonin Race than those listed here. So long as a player gains the permission of their Dungeon Master to be able to use the class they wish to.

As a final bonus, A player could select a Background during character creation that better fits the class they had chosen, making the option much more viable than without it.