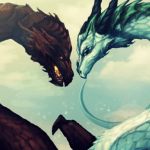 Sometimes, a player who has just multiclassed into a spellcaster or made the character a spellcaster from the beginning will need to find what they want to use for Cantrips.

These free spells are normally either pure damage, buffs, or other spells that don’t damage the enemy but instead move them around as the player wishes.

For example, the Thorn Whip 5e spell, the topic for this article, actually does both damage and moves the target as the caster sees fit, to the degree that will be described later on.

Contents hide
What is Thorn Whip 5e: mechanics and requirements
Attributes
Thorn Whip 5e description
Advantages and drawbacks
Advantages
Disadvantages
Best uses for Thorn Whip 5e
1. As a purely damaging spell
2. As a means of singular crowd control
3. To pull mounted enemies off of their mounts
Advice and final thoughts
Thorn Whip Spell FAQ
Are there other uses for Thorn whip 5e in and outside combat that don’t rely on the spell’s damage?
Can the pulling effect of the spell work in the opposite way?
Can the caster choose not to damage the target and instead just pull them closer to them?
Related Posts:

What is Thorn Whip 5e: mechanics and requirements

You create a long, vine-like whip covered in thorns that lashes out at your command toward a creature in range. Make a melee spell attack against the target. If the attack hits, the creature takes 1d6 piercing damage, and if the creature is Large or smaller, you pull the creature up to 10 feet closer to you.

When the spell attacks an enemy that is Large or smaller within the range of the spell and if it hits the target in question, then the thorn whip not only does piercing damage to them but also pulls the target 10 feet closer to the caster.

This gives the spell’s Caster a chance to damage the enemy target. Still, it also puts the enemy in a position where either the caster or their party can reach the hostile creature more easily than before.

Although the physical material required to cast this spell is not as common as some other cantrips’ materials can be, the player can use passive roleplay within the campaign to grow the materials required and gain them that way.

This is especially something that can be done in this manner if the player with the cantrip is a Druid, meaning they could use their magic to grow the materials needed to be able to do such an action.

Since the spell is a Cantrip, there is no actual set number of times that the spell can be cast during a battle. This means, effectively, a player can constantly use Thorn Whip to damage and move an enemy around the battlefield to keep their movements restricted. And also to gradually whittle the enemy’s health down until another party member kills them off, or they die from the constant use of the spell.

Since upcasting a Cantrip is not a thing within the ruling of how spells function in DnD, there is an alternate way that the spell becomes improved during a campaign.

When a player reaches Levels 5, 11, and 17, the Spell’s damage increases by a single dice, giving more usefulness out of the spell’s damage output.

Although the spell is great to use in the early game of a campaign, the damage output of the spell itself does not make it a viable combat option in the later levels.

Even with the increase in damage as the player levels up throughout the campaign, it is simply not enough to be usable in mid to high-level combat encounters. Here almost every type of enemy used in those encounters can simply brush off the damage. On top op that they can even ignore the move portion of the spell if they are a Huge creature.

While this is true for any spells that requires a physical material to be used up to be able to cast a spell, this can be a bit more impactful than other lower-level spells.

This is because such material, although still fairly common to come across around the world the campaign is set in, can be easy for a player to run out of in the early game.

However, once they reach a certain level past the lower levels, say around levels 5 to 6, this problem can be pretty much nulled out if they are a Druid, or if they just stock up on the plants through bartering with shopkeeps in the campaign.

1. As a purely damaging spell

Although showing a much better use as a way to control the enemy once they reach higher levels, Thorn whip can be used simply as a damage spell during the lower levels of their character. That way, they have a means of being able to use magic during the campaign that can damage an enemy. At the same time, they are unable to use any of their actual leveled spells, either due to

2. As a means of singular crowd control

When they reach a high enough level to where the caster has access to Leveled spells that use spell slots instead of acting as cantrips, Thorn Whip might not seem as appealing to use as a spell.

Regardless, the caster can use Thorn Whip to focus on a single enemy and keep their movements all over the place on the battle map, making it difficult for that specific enemy to make any attacks while they are being yanked around by the spell.

Suppose the caster coordinates the spell usage with their fellow party members. In that case, the enemy affected by the spell can be pulled into the melee range of another party member to make attacking them much less hassle.

They can also be pulled away from a player character to allow them to gain an attack of opportunity, effectively working as a free attack action against the affected hostile creature in question.

This can also be done outside combat when an NPC the party is attempting to capture is trying to flee from them. It can grab the NPC and pull them back, giving the party members chasing after them an easier time in catching the NPC.

3. To pull mounted enemies off of their mounts

Similar to the previously mentioned use, the Thorn Whip spell can pull enemies closer to the caster while damaging them, so long as they are within range. Something that isn’t fully thought about when players select this spell is that Thorn Whip can also be used to pull enemies mounted on large creatures like horses off of them.

Doing this makes them an easier opponent to handle. This can also be done outside of combat if an NPC that the party needs to capture has gotten onto a horse and is attempting to ride away on it to escape from the party.

In the early game of a campaign, regardless of whether it is a homebrew campaign or a module that was found in a piece of published media for Dungeons and Dragons. Thorn Whip can double as both a damage spell and a control spell, thanks to the vine summoned by the spell moving the enemy targeted towards the caster and damaging them in the process.

The spell is best used in the mentioned early game, while the player in question does not have access to as many damaging spells or spell slots to put those types of spells in to replace it. Once they reach higher levels, however, they should be used more as a tool of crowd control rather than damaging the enemy.

That way, the spell can still aid the party while not being a waste of a cantrip slot that could have been filled by another spell that could either do more damage against enemies or could be a more useful utility spell to replace it with.

Are there other uses for Thorn whip 5e in and outside combat that don’t rely on the spell’s damage?

There are quite a few that exist that were not previously mentioned in the article. For example, besides pulling mounted enemies off their said mounts, Thorn Ship can also pull flying enemies down to the ground, so long as they are within the 30 ft. range of the spell. So, for example, if a player has Spiderclimb and is up on a wall, pulling an enemy towards them would force them to fall back down to the ground and make them take falling damage.
They could also combine Thorn Whip with Spell Sniper to make the pulling effect double in its distance so that it can reach an enemy from 60 ft. instead of 30, along with either Spike Growth or Gust to pull or push them into AOE effects that were either there before the start of a battle or were created by the party. Finally, Thorn Whip can trigger traps or other AOE effects without damaging any party member, making it very useful for dungeon exploration.

Can the pulling effect of the spell work in the opposite way?

Although it is not recommended that someone does that, they technically can as long as the Dungeon Master running the campaign says that the spell can do so.

Can the caster choose not to damage the target and instead just pull them closer to them?

Again, similar to the second question, this is technically possible, though it is mainly up to the Dungeon Master whether they will allow this to be possible.