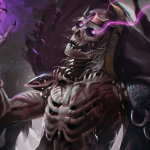 The Skeleton is one of the most accessible creatures to face down within a regular campaign of Pathfinder. However, due to its incredibly low AC and low Health Pool, along with the meager damage output of the monster, the Skeleton is best used for a low-level party.

The Skeleton variants for Pathfinder have varying difficulty depending on the type used and the stats it may have. This will be the subject matter of this Article, as there are more than enough differences between the two versions to make a difference.

Finally, the main Skeleton that will be described is the Human Skeleton Warrior, though the other variants will be mentioned.

Contents hide
What are Skeletons: Attributes and description
Attributes
Skeleton Pathfinder: Advantages and drawbacks
Advantages
Different Variants
Improvements based on Size
Improved Initiative
Disadvantages
0 Ability Score for Constitution and Intelligence
Loss of many unique creature properties
Best uses for Skeletons in a Pathfinder Campaign
1. A Massive Horde
2. Where there’s a Whip, there’s a Way.
3. Guards of the Lich King!
4. A Boss of their own
Advice and final thoughts
Pathfinder Skeleton FAQ
What happens if the Skeleton has more than 20 Hit Dice?
What happens to the Skeleton’s Natural Weapons?
Is there any way for a Wing Skeleton to be able to fly?
Related Posts:

What are Skeletons: Attributes and description

Many kinds of Skeletons can be used for any situation, which will be put into a much bigger focus in the Uses Section of this Article. To start, counting Human Skeleton Warrior, there are at least 9 different types of Skeleton, From the Human Warrior to the massive Young Adult Red Dragon Skeleton.

However, the Skeleton is technically a template that can be allied to any creature, with the 9 mentioned being examples that exist. Such a wide array of different types of Skeleton not only allow the Dungeon Master to not only be able to use Skeletons more often, but it also allows for a creative mixture of Skeleton Variants in one battle arena.

An example would be if the Dungeon Master wanted to create an Undead Boss Battle but didn’t know what to use; They could grab one of the more dangerous Skeleton Types as the boss and throw in the weaker ones to give it some extra protection.

Overall, having these different types of Skeletons simply promotes more uses for them, especially with the differences in abilities, attacks, and other key points that will be touched upon later.

Improvements based on Size

As mentioned in the introduction of this Article, several things were written in a range as opposed to an absolute number, with the reasoning being that the ranged items are not solid numbers and are affected by several factors.

As for the Challenge Rating, this is affected by the number of Hit Dice the creature will have, though this is its unique calculation. By removing the hit dice gained from class levels (to a minimum of 1) and then raising the dice to d12s, the Challenge rating would be classed by the total of hit dice remaining, with this number changing based on the creature that is made into a skeleton, and how many levels are removed.

In this case, the Skeleton Human Warrior has a CR of ⅓, but other variants can quickly have Higher CRs, making them more dangerous to go up against.

Something else that could be noted from the Attributes section is the change of the Proficiency Score part to list the Initiative. That change was made specifically due to this Advantage that the creature and all of its variants have; Improved Initiative.

This Feat allows the Skeleton to add +4 to their Initiative Modifier instead of whatever would generally be applied, which for the Human Skeleton Warrior is a +5.

This bonus grants any skeleton an improved chance of being able to go first instead of the Players, making combat all the more dangerous against the creature than if it was not able to go first.

0 Ability Score for Constitution and Intelligence

Having a 0 for any Ability score can spell trouble for any creature. Pathfinder This is slightly more of a boon than a burden, though the cost of having this is incredibly severe and is more favored towards the Constitution than the Intelligence.

To start with the Good items first, the Skeleton’s 0 Constitution grants it Immunity to Fortitude saves unless the effect lists it as either Harmless or functional against objects, Ability Damage, Ability Drain, and Energy Drain.

This low Constitution can also give the Skeleton an indefinite number of running actions without making a constitution check. Of course, the high cost of the terms of the Constitution being at 0 is that any Con Checks made by the Skeleton automatically fail, which might not seem like a big deal for the weaker creatures. Still, it can matter for the more difficult, boss-level creatures.

As for Intelligence, the lack of a positive score in this ability grants the Skeleton Immunity to mind-affecting effects. Such as charm or compulsions, but the cost is much higher than for Constitution.

Not only does the Skeleton and any Variant encountered by a party automatically fail Intelligence Checks that it would have to make, but it also is unable to have any Feats or Skills. However, Racial Bonuses and Bonus Feats are permitted. Overall, the cost of having a 0 is a mixed bag for both Constitution and Intelligence.

Loss of many unique creature properties

As part of the creature becoming a Skeleton Variant of itself, it loses a lot of things that it originally had from its previous existence. These Undead beings lose any special attacks they may have had, the majority of their Special Qualities (save for those that improve their melee or ranged attacks.), all of the feats of the base creature, and the ability to fly if the creature is a Winged Skeleton.

This pretty much makes whatever was created from it a brand new being, but it can also weaken the monster if it becomes a Skeleton instead of making it stronger if that was the intended goal of the Dungeon Master.

In addition, any Skeletons have their Constitution and Intelligence reduced to 0, their Charisma reduced to 1, and their Wisdom changed to a flat 10, with the only genuine improvement being a +2 to Dexterity.

Best uses for Skeletons in a Pathfinder Campaign

As with many things that people think of when it comes to the undead, Massive Hordes filled with hundreds of unread creatures rising from the grave and marching toward their prey is one of the top things people think of.

As such, something that the Dungeon Master can do in the middle of a campaign is throw a large amount of low-tier Skeletons at the party for them to kill in droves. Combined with Zombies, which are similar in terms of the template function of the creature, these monsters can be used to surround and overwhelm a party.

These encounters can mainly happen in many locations where large amounts of the undead would be found, such as forgotten battlefields, ancient ruins, and even graveyards within a major city.

Although there is no specified natural formation for the Skeletons, they can still be organized in all sorts of groups per the Dungeon Master’s digression. They could be small squads shambling about a footpath or an entire army marching down a main road toward a city to lay siege to it.

Whatever method is chosen for these, the Skeleton Template could extend to help in this formation, as creatures naturally placed into formations as part of their stat blocks, like Goblins or Orcs. A Dungeon Master wanting to make an army could quickly look towards creatures with Organization Patterns.

3. Guards of the Lich King!

Of course, anyone and everyone who has played Pathfinder would be able to know that a Lich is an incredibly powerful Necromancer, with all sorts of undead beings at their command to do with as they, please.

As such, such a powerful being would probably want their own personal guard to defend them from an attacking party or help them in a final confrontation as additional minions. With powerful creatures within Pathfinder, such as Gorgons, Griffins, and Manticores, as a few examples, a battle against a lich could be a great deal more difficult than if it was just the Lich alone.

Of course, the choice of how many creatures the Lich has accompanied them in the final battle between the party and the Lich themselves and what Skeletal Creatures are there is up to the Dungeon Master, though whatever choice they make can have a major impact on the difficulty of the battle itself.

With a wide array of creatures being able to be made into a Skeleton Variant of itself, a Dungeon Master would inevitably want to make a boss out of them. However, using something like a Red Dragon or a Terrasque as a Skeletal Variant still makes it quite a difficult monster to handle, especially with extra creatures that are Skeletons and aiding it in the fight, similar to the previous use that was mentioned.

A Dungeon Master could double up the Lich mentioned in the example for the previous use and a Skeletal Boss Monster to further increase the difficulty of either monster’s battle with the party.

The Skeleton Template can be used for many things that could help a Dungeon master whenever they need an encounter to balance towards the party’s level. So whether it’s simply some skeleton wolves and human warriors or the Dungeon Master decided to throw an entire Skeletal Dragon at the party, the capabilities with the Template are rather endless, with only the Dungeon Master’s choices being the limiting factor.

What happens if the Skeleton has more than 20 Hit Dice?

Suppose the Skeleton that is created happens to have more than 20 Hit Dice once the calculation on said number of Hit Dice is made. In that case, outside of peaking at a CR of 8, it cannot be summoned through the Animate Dead spell if it turns the creature into a Skeleton Variant of the original creature.

What happens to the Skeleton’s Natural Weapons?

The Skeleton’s Natural Weapons remain, and the damage stays the same, but there are a few caveats. If the natural attack requires flesh on the body to do it, then the Skeleton Variant cannot use that attack. If the attack is specifically the Claw attack, the damage is scaled by the size of the creature to a maximum of 2d8 damage if it is a Gargantuan creature.

Is there any way for a Wing Skeleton to be able to fly?

The only way for a Winged Skeleton of any kind to be able to fly once it is created in this manner is through magical means. This is only possible if the original creature flew through these same magical 787 means, and it cannot be applied to the creature if it did not have such power before it died.