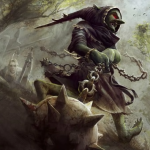 When creating an Orcish Army, the ranks must be filled with what they consider to be the cannon fodder of the army. The Goblin fits that role relatively quickly, as they can be used to form little organized groups similar to the Orcs in Pathfinder.

Still, they are also fragile and prefer to attack in mass instead of single, tanky units capable of handling entire armies. The Goblins will be the subject of this Article, with their unique setup that can give the Dungeon Master an excellent weak enemy for a low-level party.

Contents hide
What are Goblins: attributes and description
Attributes
Pathfinder Goblin description
Advantages and drawbacks of goblins in Pathfinder
Advantages
Organization Options
Multiple forms of combat options
Disadvantages
Incredibly weak on their own
Best uses for Goblins in a Pathfinder Campaign
Small Patrol for Orcs
A Forward Operating Base
“Down in Goblin Town!”
Cannon Fodder
Spy vs. Spy
Advice and final thoughts
Pathfinder Goblin FAQS
Do the Goblins have any excellent loot on them once they are killed?
What would be the best environment for a large group of Goblins to be placed within?
Does the Goblin have any major Features?
Related Posts:

What are Goblins: attributes and description

A goblin is a short, emaciated-seeming goblinoid, about the size of a halfling. They tend to be around three feet tall with large, flat heads and long ears. Their skin tends to be leathery and grey, often wrinkled and covered in tiny scars, warts, and scabs. Goblins grow little, if any, hair, relying on their thick skin and huddling together in groups to keep warm.

They have small, beady red eyes set close together over a little pug nose, above a hideously wide mouth lined with sharp little teeth. Goblins often dress in rags and scraps cast off by other humanoids and bear coarsely cobbled-together equipment.

Advantages and drawbacks of goblins in Pathfinder

A significant part of the Goblins and their functionality is to be grouped into several different Organizations that can exist. These Organized formations can range from a small Gang up to a massive Tribe, with the amount of Goblins, Worgs, and Non-Combatants varying depending on the group size.

These different options for a formation that can be chosen for the Goblins can help widen the other things that a Dungeon Master can do with them. This also helps combat the only real disadvantage that the Goblins have, which will be discussed in the Disadvantages section of the Article.

With the different Formations that can be chosen for the Goblins, there are other forms of combat that the Goblins are more than capable of using in the smaller or larger groups. For starters, the Goblins can ride Worgs or Dire Wolves, using the Mounted Combat feature instead of the standard Alertness feature that the Goblin has.

They are also given a racial bonus to both the Move Silently and Ride checks. This allows them to be used as spies, thieves, or assassins that can sneak into an area and get back out once they finish their task.

Incredibly weak on their own

The primary weakness of the Goblins is mainly in terms of their combat efficiency. Strictly speaking, the Goblin is incredibly weak, as they can be easily killed within a single attack or two.

Especially if they are pitted against a mid-to-end-game party that has plenty of levels, magical items, and other abilities under their belt that make killing hostile creatures a breeze. As such, any Dungeon Master would be wise to use these Goblins in groups instead of singular opponents not to cause a combat encounter to end within 2 minutes or less.

Best uses for Goblins in a Pathfinder Campaign

One of the great uses for Goblins that will be touched on a second time later in this listing is their stealth capabilities and various combat styles. These skills can allow them to form small patrols consisting mainly of stealthy footsoldiers and mounted combatants that maintain a certain perimeter, say around a critical location or an Orcish War camp.

Using these weaker enemies allows a party to not only dispatch them quickly, but if the party cannot stop one of them from escaping, they could alert the nearby Orcs and make the combat encounter more complicated and more dangerous than it was beforehand. The recommended size for such a task would be a Gang, which has anywhere between 4-9 Goblins as a part of its ranks, though the Dungeon Master can choose how many Goblins are mounted on Worgs or Dire Wolves and are staying on foot.

A Forward Operating Base

A more significant force of Goblins, such as a standard band, could act as a specific checkpoint in the form of a F.O.B. Of course, the Goblins wouldn’t have to be the only ones there.

The Goblins could be intermingled with Orcs in said Band to make the checkpoint even more formidable against the party.

On their own, though, they do have numbers on their side, as a standard band can have anywhere between 30 to 120 total Goblins within its ranks doing various things. The Dungeon Master can add in Worgs to replace some of the Goblin Footsoldiers that could be there. These sorts of Bands don’t have to be used for Forward operation bases, as they could be a simple raiding party constantly attacking a small town for their resources, which happens to lead quite nicely into the next point.

“Down in Goblin Town!”

The largest group of Goblins that can exist is called a Tribe, with the maximum possible amount of Goblins being a part of it being an astounding 420 Goblins of various positions, with another 28 members being of Worgs and Dire Wolves. Such a large amount of Goblins can be a significant story point in the game’s main quest, as they could hold control of a particular area within the path the party must traverse.

Either must be defeated to be allowed passage or try to sneak their way past all of the Goblins to make their way through. Of course, it could also be combined with a central Orc Tribe to act as the main purpose of the next piece of this section: Cannon Fodder.

As mentioned less than a sentence ago, the Goblin Tribe could be combined with another tribe of Orcs to be used as a major army against the party and/or their allies. In this case, the party would witness the Goblins being used as frontline infantry that is easy to kill in small numbers but could easily break through enemy lines and overwhelm an enemy should they be unprepared for such a massive force.

With the Orcs backing them up as heavy Infantry, Archers, and other wartime combatants, that could give the Goblins more time to reach the enemy frontlines and cause mass chaos. The whole purpose of the Goblins, in this case, would be simply to ride into battle and die while taking as many enemies down with them as possible, as to give the Orcs a better chance of dealing the heavier blows without losing many of them to enemy defenses.

Since the Goblins could also ride Worgs and Dire Wolves, they could also be used in out-flanking maneuvers, surrounding and attacking an enemy army from all sides while the Orcs close in on a specific front to break their lines with ease.

While all of the previous uses have mainly focused on the uses of Goblins while they are all in a group since that is the best and most effective way to use them in combat.

This would be the art of espionage and assassination, as previously spoken of briefly in the Article. Such uses could be an incredibly minor combat encounter with a small group of Goblin Assassins or a story beat where some Goblins stole an important plot item.

Thus making the party need to go get it back, or it could even allow the Dungeon Master to write in the death of a character in the story of the campaign to drive the plot forward. Either way, while it is best used in larger groups, there are some things the smaller groups of Goblins can be used for, even if a D.M. decides to only use a single one.

As it has been shown up to this point, the Goblin on its own, save for a small number of uses that could be thought of by other Dungeon Masters, the Goblin is more suited for larger combined groups than smaller forces that a party could easily wipe out.

Even integrating them with other creatures, such as Orcs, can become more deadly once more are within a particular area. Otherwise, while these make for good low-level encounters, it’s best to have them more as supporting combatants than primary fighters in battles involving them against a part that is either at the midpoint of a campaign or is rapidly approaching the end game of it.

Do the Goblins have any excellent loot on them once they are killed?

The loot on a Goblin can be called “Standard” loot, meaning a player who decides to loot their body could find a variety of things, From small amounts of gold pieces to small weapons like daggers and small shields on their bodies. The chance of something on the body of a Goblin being a magical item is pretty rare unless the dead Goblin was one of a high rank within the Goblin hierarchy.

What would be the best environment for a large group of Goblins to be placed within?

The best environment for them, as described in their Stat Block, would be Temperate Plains, though they could mainly end up anywhere. Another good place for them could be a cave system, as Goblins would probably want to use the many different tunnels and pathways that could naturally form in cave systems to their advantage when they are under attack.

Does the Goblin have any major Features?

Outside of what has been described throughout this entire Article, the Goblin only has one prominent feature; Alertness. Alertness gives the Goblin a +2 bonus to any Listen and Spot checks, with further helps these creatures be good scouts and/or lookouts for more dangerous creatures that would be out there.