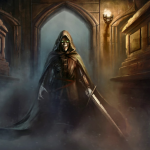 A ubiquitous creature within Pathfinder is the Undead, beings that have risen from the grave to attack those who still reside amongst the living. As such, one of the very first things that a person will think of when the topic of undead monsters comes to be talked about is that of the Zombie, which has been made popular through all kinds of media.

Pathfinder is no different, as the Zombie could be seen as a famous creature when a party is coming up against the Undead. As with the Skeleton Article that is a part of this site, this Creature is more of a template than a specific monster. So some stats will be listed as a range instead of a solid number.

For the stats, the Human Commoner Zombie will be used in the exact numbers and item portions, but the Zombie Temple as a whole will be discussed.

Contents hide
What are Zombies: attributes and description
Attributes
Advantages and drawbacks of Zombie encounters
Advantages
1. Template = many different variants
2. Undead Traits
3. Increased parameters
Disadvantages
1. Poor Reflexes
2. Loss of most of the original Creature’s stats
Best uses for Zombies in a Campaign
1. Single Tanky Enemy
2. Night of the Living Dead
3. Bones and Brains?
4. Lichdom’s Keep
Advice and final thoughts
Pathfinder Zombie FAQ
What happens if the Creature could fly via wings before being Zombified?
Does anything happen to improve the Zombie if the number of hit dice reaches a certain point?
Are there any environmental restrictions to the Zombies where they can be found?
Related Posts:

What are Zombies: attributes and description

Advantages and drawbacks of Zombie encounters

The Zombie is technically a template as opposed to an actual creature. This means that the Dungeon Master can choose any monster within Pathfinder and turn it into a Zombie Variant of itself through the means of Necromancy used by either a deity of some kind, a Lich, or some other magic user capable of such power.

These Zombie Variants differ from the original Creature in many aspects outside its most prominent part. However, this also makes it more potent depending on certain conditions that will be discussed later.

Furthermore, having this Creature function more as a template allows the Dungeon Master to have a broader range of creative options to go along with whatever the party is currently doing within the campaign. No matter if they are following the campaign’s main or side quests.

These traits were not discussed in the Skeleton Article elsewhere on the site, but they share them, as they are synonymous with the Undead Creature Type. To start at the top, Undead Creatures, which include the Zombie, are Immune to all effects that could alter the mind of the Creature, such as Charm or Phantasms, along with being Immune to several different miscellaneous effects.

These effects are Poison, Sleeping Effects, Paralysis, Stunning, Disease, and Death Effects, though that’s not all the Creature would be immune to. It can also not be subject to Critical Hits, non-lethal damage, ability drain, or energy drain, as well as fatigue and exhaustion effects.

Finally, the Zombie Creature is immune to any effects requiring a Fortitude check, making any Zombie Variant created quite dangerous if a player character relies on these checks and types of damage/affliction to be able to be effective in combat encounters. There are costs to these, but those will be discussed in the Disadvantages section of this article.

As the final comparison to the Skeleton Template, many things are subject to change in the monster’s stats depending on many external factors besides the base states of the Creature turned into a Zombie. The Size, for instance, can affect the Armor Class of the Creature, depending on if it is past the Tiny Size.

The Size can also affect the damage of the Slam attack, with the absolute maximum amount of damage being dealt as the extra damage being 4d6 damage with a Colossal Zombie. Besides, the Challenge Rating can be changed similarly depending on the Health Dice of the Creature.

This is calculated by dropping any class levels the Creature might have had (down to a minimum of 1 level), and then you would double the hit dice left and change them to d12s. The number at the end of this equation determines the Challenge Rating of the Zombie Variant at the end of it.

As part of the Zombie Template, the Creature gains the “feature” known as Poor Reflexes. Unfortunately, this heavily reduces what the Zombie can do, as it is forced to use only one action at a time; either a move action or an attack action.

This can be extremely limiting, as most creatures within Pathfinder can do several different actions per round. There is a slight exception to this that allows the Zombie to both move its movement speed and attack a target simultaneously, but that is only if they use the charge attack to be able to do so.

2. Loss of most of the original Creature’s stats

When a creature is made into a zombie, it loses a good amount of its actual stats from when it was still alive. Specifically, it loses most of the unique qualities it has that do not enhance the melee and ranged attacks, all of the special attacks of the Creature, and all of the base feats, gaining the toughness feat as a slight compensation for it.

In addition, it has no skills whatsoever, regardless of whether the Creature had any skills before it became a zombie.

This can be seen as a significant weakness depending on what Creature is turned into a Zombie by the Dungeon Master, especially if it is a boss monster that would have been used for a significant battle between it and the party.

Best uses for Zombies in a Campaign

Depending on the enemy chosen to become a zombie, the Dungeon Master could make a single Zombie Enemy that is incredibly tanky in regards to its Health Pool, making combat encounters with this Creature last longer than ordinary encounters with a single enemy normally would.

This also can be counted as a boss encounter since the description of a single tanky opponent can easily describe one in the first place. Of course, this is all determined by what Creature the Dungeon master chooses to make into a zombie variant, especially if they choose something like a Dragon to fight the party.

2. Night of the Living Dead

The number one thing thought about when it comes to Zombies is their massive hordes that can be found through different forms of media across the board. Pathfinder is no additional, as Dungeon masters can easily make many low-health zombies chase after the party in any environment that would fit what the party is doing.

They could even enclose the party in a particular area and force them to fight the zombies off. It makes for a perfect scene-by-scene comparison to any major zombie film with situations where the main characters must fight off a massive horde approaching them from all sides.

While this is technically a different branch-off of the idea of the previous use, Zombies and Skeletons could be thrown together in the same horde to make it hold extra variety past the standard horde of Zombies. Not only that, but since the Skeletons have different stats from the Zombies, a Dungeon Master could make the Skeletons more oversized, bulkier, and more dangerous.

The Zombies, on the other hand, act as the weaker cannon fodder for the party to weaken their defenses before the Skeletons themselves arrive to finish them off. While this is an idea best meant for a higher-level party, it can still make for a lengthy and entertaining combat encounter if done correctly.

The Lich is a powerful enemy capable of commanding any undead creature, with Zombies being no exception to this notion. A Dungeon Master could give the Lich Zombified bodyguards of any creature they choose, especially if it is supposed to be the final combat encounter between the party and the Lich itself.

This can make the combat encounter more difficult than if the Lich and the party were fighting one another without them being there. Depending on the Creature that the DM decides to make a Zombified variant out of for the party to encounter, this could also be used as its combat encounter or even its boss battle.

The Zombie and the Skeleton share similar usability within a campaign to each other, regardless of whether it is a Lich controlling them, a random Necromancer, or simply a pest that has recently begun causing problems for a local living populace. Of course, the Zombies are more capable of certain things than the Skeletons.

Still, the two templates are seemingly meant to bounce off of one another and aid each other in battle encounters with the party characters instead of being thrown at each other as opposing forces. So, it’s best to use the Zombies with the Skeletons and other Undead creatures, as they are incredibly versatile in what the Dungeon Master can use them for.

What happens if the Creature could fly via wings before being Zombified?

If the base Creature that is Zombified could fly before it was turned, then the maneuverability rating of the Zombie is moved down to “Clumsy.” This rating can significantly affect what the Creature can do while flying, but it is still capable of flight to a certain extent.

Does anything happen to improve the Zombie if the number of hit dice reaches a certain point?

If the Zombie gains more than 10 Hit Dice after the final calculation determining how many they have, they cannot be created from the Animate Dead spell. This is in a similar light to the Skeleton, which shared an exact possibility should they reach a certain number of Hit Dice.

Are there any environmental restrictions to the Zombies where they can be found?

Regardless of the type, zombies can mainly be found on any Land terrain or underground. However, nothing restricts the Zombies from being discovered in other areas, such as in the air or underwater. However, these two are relatively rare for anyone to spot a Zombie.