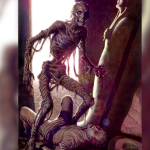 One of the many different schools of magic that exist within any TTRPG is the School of Necromancy, with Pathfinder not exempting from this fact. Many Necromancy spells exist within Pathfinder for a player to choose from, though there is one that can be useful for anyone wanting to become a proper Necromancer within their party; Create Undead.

This more powerful version of Animate Undead allows you to make stronger monsters with its power, which will be discussed as the primary topic of this Article.

What is the Create Undead spell: mechanics and requirements

● Components: Vocal, Somatic, a clay pot filled with grave dirt and another filled with brackish water, and a black onyx gem worth at least 50 gp per Hit Dice.

A much more potent spell than animate dead, this evil spell allows you to infuse a dead body with negative energy to create more powerful sorts of undead: ghouls, ghasts, mummies, and mohrgs. The type or types of undead you can create are based on your caster level, as shown on the table below.

Advantages and drawbacks of Create undead in Pathfinder

As a part of create undead capabilities, a caster can use this Spell to create more powerful types of Undead creatures, ranging from a Ghoul to a Mohrg. Of course, what the Caster can summon is strictly based on their caster level, meaning to be able to summon other creatures besides the Ghoul, you need to be past Caster level 11 to be able to do so.

While this can be seen as a restriction on the player with the Spell, it is done for a good reason; Balance. The Mohrg is a Challenge Rating 8 monster, which, when put up against enemies weaker or equal to its power, could give them a run for their money. As such, the Caster should be only able to choose one dead body at a time to make the spell work.

The word “possibly” is the key word here, as the Undead creatures created with this Spell can be controlled if the player character can command Undead. However, they are not automatically under the Caster’s control, and instead, it must be forced upon them through other means of domination and control.

This can be seen as a negative trait if the player does not have any means of being able to control undead creatures like skeletons. Though a player could work this to their advantage by trying to have the enemies be as close as possible to the body targeted by the Spell, so then the Undead creature would target them first.

3. It can make weaker Undead with it

While the Spell is more than capable of making incredibly strong Undead Creatures, it is also capable of making weaker ones. The Dungeon master can interpret this in two ways; Firstly, the Spell could simply be capable of creating the other creatures that have lower caster level requirements than where they are now, such as being able to create a Ghoul while at Caster Level 18.

The other, more interesting method could be that the creature created by the Spell could be anything from weaker spells that do a similar thing, such as Animate Dead, which can make Skeletons and Zombies out of it being cast.

It’s up to the Dungeon Master which way they choose to rule it, but either can be useful in combat encounters that need an extra pair of hands for the party to use in battle.

The materials needed to cast the Spell itself are incredibly expensive. Specifically, the Onyx Gem that costs 50 GP required to cast the Spell can become a heavy expense on a player since the player would need one gem for each Undead creature’s hit dice.

For example, if the player tries to summon a Mummy, they would have to spend 400 Gold on the gems to cast the Spell properly. This can be rather limiting for a player, especially if their campaign does not grant them high gold rewards on a common basis.

2. Can only be cast at night

A slightly bigger restriction of the Spell’s casting capabilities is when the Spell can be used; It can only be cast in the dark of night, as opposed to Necromancy spells within 5th Edition Dungeons and Dragons, which do not have such a restriction on them.

Paired with the high cost of casting the Spell for certain creatures due to the physical materials, this Spell could be looked at by a player with a slightly unwanted to cast it during a battle.

1. A second pair of hands

As stated in multiple parts of this Article, the Spell can be used as an extra body during a combat encounter. This is simply to aid the party in handling a larger group of enemies than there are in their grouping, giving the enemy the advantage in terms of numbers.

The Undead creature, regardless of its strength or whether the player who created it is controlling them, would most likely go on a violent rampage and begin attacking the closest thing within its reach.

This is why it had been previously mentioned that the best use for it would be when a corpse is incredibly close to an enemy or a group of enemies, to be able to rise from the dead and immediately begin attacking the enemies. Of course, due to the hour-long casting time that the Spell requires, it is best used when preparing for a hostile force to approach the area the party is in rather than trying to get it up mid-fight.

While the hour-long casting time can hinder the Spell’s useability, another use outside combat can help with the party’s tasks and needs. For example, suppose the party is trying to escape a group of enemies on the hunt for them. In that case, the Caster could target a corpse to turn it into a powerful Undead creature for the hostile group to fight while they are hunting for the player characters.

This could give the players a chance to escape the enemy force or even kill them off via proxy, making it useful as a distraction. Of course, there is no guarantee that the Dungeon Master would allow the party to use the Spell this way.

Even more so when the Undead creature would be fighting the enemies as a technical combat spell for the Caster, this is a possible use that the Dungeon master and the party alike can implement.

While the create undead spell in pathfinder itself is incredibly powerful in terms of what it can create, several things hinder it as a part of its core functionality. Its incredibly long casting time, the expensive physical materials required, and the daytime restriction on the Spell all hinder and restrict its usage.

I would recommend avoiding create undead in pathfinder altogether. However, since they are a part of the spells gained by some Clerics who take the Evil or Death Domains, I would advise instead to look towards the other spells the Domain offers.

What would happen if you tried to cast the Spell during the Day?

The most simplistic answer would be that the Spell simply doesn’t work at all, though whether the Spell eats up the physical materials when the Caster tries using it in the Day is up to the Dungeon Master. Said DM could add in flavor text as to what exactly happens to the undead creature when the player tries to summon it during the Day, but past that, nothing would happen to the Corpse.

How long does the Undead Creature remain?

Regardless of what it was, the creature most likely remains there until some other force kills them off. Of course, since the Spell is restricted to Nighttime usage only, a Dungeon Master could rule that they only remain for that night or even just an hour. But this is all up to DM interpretation of how long the creature remains after being created by a player.

What happens to the gems after the Spell uses them as casting materials?