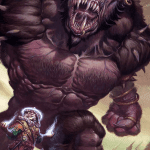 Arguably the most versatile class in the Pathfinder RPG is the Cleric. These have a ton of spells and feats you can use to make powerful niche builds. In this article, we are ranking the best cleric feats in Pathfinder. Knowing the most powerful ones will help you make a stronger cleric and beat the encounters your DM is sending your way a lot easier.

These are the factors we have considered to determine the best cleric feats in Pathfinder.

Hot tip: you might enjoy our article on the best metamagic feats too!

The 8 best cleric feats in Pathfinder

As a cleric, you will probably be on the frontlines quite often, without having the survivability other classes might have. Therefore, the improved initiative feat in Pathfinder is a fantastic option for Clerics with a ton of usefulness.

Improved Initiative gives you quick reflexes to react to danger rapidly. You get a +4 bonus on initiative checks which is a lot. Due to how often you need to make an initiative check, having a +4 is extremely powerful.

The sacred summon feat is one of the best feats you can pick for your Cleric in Pathfinder. You will notice that this is one of the three summon-related feats on the list. That is because summoning builds in Pathfinder are extremely powerful.

Sacred summon requires you to have the aura class feature and the ability to cast summon monster. When you cast, summon monster, and the creature you have summoned, his subtype(s) matches your aura; you can cast the spell as a standard action, not a spell with a casting time of a round.

This feat massively improves the caster’s action economy; as you know, doing as much in one round is the key to destroying stronger foes than you.

Are you interested in making an Oracle built-in Pathfinder? Check out what the best oracle spells in Pathfinder are.

Another summoning-related feat that makes it high on our list of best cleric feats in pathfinders. When you pick this feat, your summons will be more potent and durable. The requirement for this feat is that you have Spell Focus.

When you pick the augment summons feat for your Cleric, all the summons you conjure has a +4 enchantment bonus to both STR and CON for the duration of the spell. Those two stats are exactly what you need to make good summons great.

If you have a cleric based around summoning, you will get a ton of use out of augmenting summons.

The requirements for the Dervish Dancer feat are pretty high. You need to have a DEX stat of 13, weapon finesse, two perform ranks, and you have to be proficient with a scimitar.

If your Cleric has chosen the Dervish Dancer feat, then you can use your DEX modifier instead of your STR modifier on melee attacks and damage rolls. But, of course, you can only do this when you wield a scimitar.

Remember that this feat only works on clerics that have been investing into Dex a lot and are built for melee fighting. Therefore, this feat is not helpful if you are a summoning cleric. That is why it ranks number four and not any higher.

Summon Good Monsters is the final summoning-related one on our list of best feats for a Cleric in Pathfinder. This spell allows you to summon creatures with a good nature and driven to destroy evil.

To use the Summon Good Monster feat on your Cleric, you must have a good Alignment. When you cast Summon Good Monster, you gain access to the pathfinder list of good monsters. These will have the Diehard feat if you have Righteous determination.

Thanks to the many options you have due to this feat, you can fill in many niches uses with a great monster pick.

One of the best feats the Cleric has access to is selective channeling. You can choose who you affect when you channel energy. You need to have 13 charisma and the channel energy class feature.

When you have the selective channeling feat, you can choose an amount of target in the area limited to your CHA modifier. Your channeled energy will not hit these targets. This is useful if you don’t want to hit your allies when you channel energy. This feat is one of the feats you will use the most on your Cleric.

Being a cleric means you will often have to heal and save your allies if you want them to stay alive. Being the quintessential support character, Saving Shield is one of those feats that embodies that and why it makes it on our best Pathfinder Cleric feats list.

When you pick the Saving Shield feat, you can deflect attacks that would be fatal to your ally. When an adjacent ally is the target of an attack, you can grant that ally a +2 shield bonus to their AC as an immediate action. To use the feat, you must be wearing one of these:

The feat is impressive for a cleric who is often near the front lines and uses melee. However, from a role-playing perspective, this feat is fantastic too.

Number eight on our list of best feats for a Cleric in Pathfinder. When you have a Quick Channel, you can spend a movement action to spend your channel energy and two daily uses of that ability. The requirements for Quick Channel are pretty high. You must have five knowledge ranks and, of course, the channel energy class feature.

The feat is excellent for making the most out of your action economy and is useable in as good as any fight.

Generally speaking, in Pathfinder, the summoning builds are always amongst the most substantial options. That is why three feats on this list are directly related to that built. However, if you are more interested in buffing your allies or fighting on the frontlines, there are plenty of incredible feats for clerics in Pathfinder to choose from.

Make sure you pick wisely and plan for future encounters and quests. For example, the Clerics are extremely potent, but there are many options and builts to choose from. So it is hard to make an optimal character.

Tip: did you enjoy this guide? Check out the best buff spells in Pathfinder!