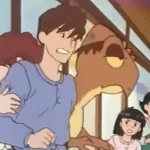 Jurassic Park is one of the most successful movies in the history of Hollywood. Being so popular that there are literal anime-inspired, it confirms that. Well, if you’re a fan of dinosaurs and want to watch something terrifying, scary, but wholesome and cute too, don’t worry! Because we’ve got you covered. This is the list of the top 10 best dinosaur anime you should watch.

The story takes place in the Sarbylion galaxy, where an organization named D.I.C.E.D.I.C.E. helps those in need. In the organization, there’s an F-99 unit full of children, and they get ignored a lot due to being young kids.

However, DICE members use a Gild suit to gain some respect among the suspicious locals. And as the trouble comes, DICE comes to the rescue with their Dino Breakers, which is sort of a vehicle it can also transform into the Dino mode to combat even the strongest villains in this world.

Bandai Entertainment licenses the anime, and the studio behind it is Xebec. It is an excellent Mecha anime, and although there aren’t any dinosaurs directly in the series, the main power of DICE members is that they can use their mechs to transform into dinosaurs.

The anime was released back in 2005 and had a total of 40 episodes. It was pretty popular among the Toonami watchers, but got lost among the gems. So if you want to watch something that will have a dino concept to it while delivering excellent action scenes, D.I.C.E.D.I.C.E. is a great choice.

The anime takes place in a dark setting where a year has passed after the Great Ganbarugal successfully beat the great three demons. However, a month had passed when the Mechanization Empire came and tried to take control of the solar system in space. They take over various planets like Neptune, Saturn, Jupiter, and Uranus in just a little time.

They turn the planets into mechanical forms; the next planet they’re after is Earth. But the Earth has a protector that goes by the name of Eldran. Eldran is very ancient and is known as the soldier of light. After finding out about the invasion, he gives his powers to three six-grade kids named Kenichi Minezaki, Hiromi Tachibana, and Shinobu Asakoa.

He grants them dinosaur-themed advanced mechs, and together, they must fight the dark empire to ensure that Earth doesn’t get turned into a tool.

The anime was released way back in 1994 and had a total of 51 episodes. There’s a lot of love for anime, and that’s why it is considered another lost gem in history.

You might already be familiar with Gon from the Gon series. The anime incorporates the unique adventure of a fictional dinosaur named Gon, who interacts with the natural world. Unfortunately, he’s so overpowered that he can destroy every other animal.

Saber tooth tiger? No problem. Gon is a fun-to-watch anime where you’ll be introduced to the dino’s daily life and what he does to survive. From fighting some of the most challenging enemies to avoiding his death in the funniest way possible, Gon is one gem of an anime.

It has 50 episodes, and it aired from 2012 to 2013. Gon got so popular that he was even featured in many Tekken series, making him a prevalent character. But the one part that confuses everyone is the CGI used in it. As CGI wasn’t accepted by the anime fans of that time, Gon quickly got lost in the world of hand-drawn anime. But if you just want a fun experience, then you should watch the crazy life of Gon.

In this anime, the story starts with Mt. Bikkura’s eruption. The volcano erupts, and a large egg gets thrown outside that hatches into a cute-looking little monster named Guzura. Coming into the human world, the monster is quite surprised to see everything he sees. Even hearing humans make him so confused that he gets scared. But at the same time, Guzura is so astonished that he wants to explore the human world more and more.

His time on Earth gets quite strange, and he gets into many shady situations. Moreover, people around him are also drawn into many questionable cases. Gezira has the magical ability to eat metal and produce unique mechanical devices. He can also fight by throwing flames out of him. And due to his powerful tail, he can jump relatively high, making him famous in the human world.

Hey, I’m Guzura. It is ancient as it was first released way back in 1967. However, what makes this anime unique is its humor. You’ll find yourself laughing at the cringe humor as simple and stupid yet still fascinating.

Jura Tripper follows the plot where a group of children is transported to another planet, planet Noah. In this world, both humans and dinosaurs are living, and upon knowing this exciting fact, all the children were terrified. But they quickly became friends with various inhabitants of the planet, such as Zans and Manua, who helped them throughout their journey on this unknown planet.

While trying to get back to Earth, the children travel this world and discover that all the humans and dinosaurs there are getting dominated by one king and the prohibition of science.

This is where the enthusiastic kids challenged the king and got into a fight with General Mosar, who was quite interested in the kid’s technologies.

Knowing that they’re the king’s primary target, they must fight with their dinosaur friends to bring peace to this oppressed world.

Jura Tripper is a fantastic series that lets you experience an isekai-style fiction world, and the whole anime is full of what-ifs. It was released in 1995 with a total of 39 episodes with 25 minutes runtime. The animation might not be the best, but if you’re looking for a lost gem, then Jura Tripper will make sure to provide you with a lot of entertainment.

Gan Gan Ganko-chan has a world full of surprises. One day, a boy named Gen time travels to the year 2020, when humanity has wholly gone extinct. He goes to the Ganko family home in the Rustling Forest only to find out that all the human technology has been lost. There’s no electricity, running water, gas, T.V.V.V., smartphones, and nothing at all. Instead, he finds himself in a world full of dinosaurs and other animals.

Now, he must survive in this timeline while finding a way to return to his old world. The anime is filled with surprises, and it was released in 2016, not too long ago. So if you want to look at an excellent animation mixed with a fantastic storyline, Gan Gan Ganko chan is a great anime with dinosaurs.

Dinosaur Planet is in a virtual station where Operator Misa enters a virtual world full of dinosaurs. Even though in the real world, dinosaurs have disappeared, this virtual world preserved the dinos as she got to experience a world full of history. However, the enjoyment ends right when a wormhole appears inside the virtual continent, and then we see Rei, a young kid who comes searching for his lost mother.

Dinosaur Planet will be pretty enjoyable because our natural world has progressed. When the anime was released in 1993, there wasn’t that much of a Virtual Reality concept. But looking forward to today, the concept seems possible when we watch Dinosaur Planet.

So for those who are not only interested in history but also the advancements of the human world, this anime will fulfill all their desires.

Uiba Shikatani, the daughter of a pet shop owner, gets heartbroken after she sees the reptile eggs failing to hatch. To cheer his daughter on, the father brings her a large striped egg which he says will successfully hatch, and they will get to see a reptile falling from here.

However, to everyone’s surprise, the egg contained a huge dinosaur named Muka-Muka. This is because the baby reptile could only say Muka Muka. However, after some time, Muka Muka becomes very famous in the town, and the town’s professor takes an interest in it.

With his time machine, Shikatani and her friends get transported into a pre-historic time where they encounter a lot of craziness. Dinosaurs are everywhere, and now they’re going to find a way out of the sticky situation to discover more secrets about history.

The story starts with Max Taylor, the son of a famous paleontologist named Spike Taylor. Max falls out of his bed and finds out that there’s a meteor falling from the sky. He sets out with his friends Rex and Zoe to examine the mystery. Unfortunately, they go into a forest where the meteor crashes.

Upon arrival, they find Lightning, Gress, and Wind Stone tablets. After Max rubs its card on the Lightning stone, he accidentally summons a Triceratops. Now, they meet their new enemies named Alpha Gang, where they want to capture Chomp, who is the dinosaur. By using Terry, who is their Tyrannosaurus, they fight Max. However, Chomp becomes good friends with Max, and the other two friends, Zoe and Rex, also find their dinosaurs.

With Dr. Taylor and his assistant Reese Drake, they are on a mission to save the dinosaurs that have appeared in the world. However, more and more dinos are appearing worldwide, and it is becoming challenging for them to fight the Alpha Gang, who wants to capture them for their schemes.

Dinosaur King is easily one of the best dinosaur anime since it has great visuals and an excellent storyline. So if you are looking for something that will completely blow every other dinosaur series out of proportion, then Dinosaur King is for you.

The story starts in the kingdom of Rimbell, the land of three princesses. One of the processes is Luna, an aggressive and assertive girl. She loves sword fighting and has an overall tomboyish vibe. After the empire of Dunbas sends a fierce attack, Luna finds out about an ancient and mysterious power that will save her whole empire.

Luna discovered that she could fuse her body with a dinosaur to become the strongest. Now, with her Varga, she must protect her kingdom and rescue her sister, who the Dunbas empire kidnapped.

The anime was released in 1991, and it was such a unique concept at that time. While there were many other gems like Dragon Ball and others, Luna Varga had a unique vision coupled with the whole dinosaur theme; Luna just looked badass in her world. All these unique aspects make Luna Varga one of the best dinosaur-themed anime.

Dinosaurs in themselves are a unique concept. However, whether we talk about games, movies, and anime, due to the history and the mystery, we’re automatically attracted to the sole idea of what living with dinosaurs would be like. So if you’re someone like me who’s all about experiencing history in the form of anime, you should check out these top 10 best dinosaur anime.