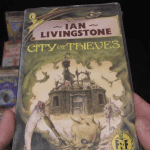 There are many different types of choices that the reader can make in these books. They may have to choose between two different paths, or they might have to pick something from a list. There are even some books where the reader has to create their own ending!

What are choose your own adventure fantasy books?

Choose your storybooks, give you a couple of pages of texts and then often ask a question. For example, you meet a goblin on the road. Do you 1. Talk to it? If yes, go to page 22. 2. Try to kill it? If yes, go to page 24. Often there are hundreds of different such questions making every single time you read the story unique and original. You influence what the hero will do and what choices he makes.

Also called Secret Path, books were super popular in the 80s and 90s. Due to the rise of smartphones, they have made a comeback on the small screen. There are hundreds of available Choose your own adventure books in the fantasy genre in the app store right now. On dedicated websites, there has been a considerable boom, too, due to easy-to-use software for making your own stories.

In my list, I will mention those that I love. It doesn’t matter what year they are from, and a good fantasy adventure is all I am looking for!

The best choose your own adventure / secret path fantasy books

I had a great time with my choice of magic. It is quite popular online and has a dedicated fanbase. The premise and the magic world where it is set is unique and very interesting.

What I like most is how much freedom the book gives you to choose your own story and what kind of character you want. The text reads fast and is very well written, and the RPG elements are great. The story is very engaging, and you get multiple fun plot twists and morally interesting choices.

The only problem is that there is a bit too much allusion to our life today and that there isn’t a sequel yet!

Blood Sword was created by Oliver Johsnon and Dave in the late 1980s. The story is set in an earth-like world in the 10th century. There are a lot of cultural influences of the major European religions of that time.

I love this book as it has a unique combat system. You have little maps made out of squares that you need to use to fight encounters. There are also obstacles and ways to flee from a fight.

Another great aspect of the combat system in Blood Sword is that you have a party with up to 4 players, and you can pick different classes with different attributes. You could pick a warrior, a trickster, a sage, and an enchanter.

Blood Sword is amazing, but very hard to find. There are 5 books so you will have quite a difficult quest ahead of you to find all 5 of them if you want to play the entire story!

To be honest, any of the following three books on the list could be my number one Choose your own adventure fantasy book.

I’ll start off with Fighting Fantasy, as I have the least urge to replay it. I still have the urge though, so don’t get me wrong.

Fighting Fantasy is made by Steve Jackson and Ian Livingstone. They had loads of popularity in the 80s and 90s. There are about 400 paragraphs of text per book that describe what is happening or the people. You just pick an option at the end and go to the relevant paragraph of that choice.

You can also play a game inside the book. All you need is a pencil, eraser and a six sided dice to play. By using the dice, you can give your character strengths and weaknesses that will influence a lot of how your story will end.

I love fighting fantasy because it is a choose your adventure book and a paper RPG in one. The artwork is also great, and the community behind it is amazing.

This four-part adventure fantasy novel / gamebook was written by Steve Jackson and has its distinct art made by John Blanch. The books were published between 1983-1985 and are a part of the Fighting Fantasy franchise. I am discussing these as a separate item because I loved them so much.

The story is set in the world of titan. Here an artifact is known as the Crown of King, this gives the wielder the power of leadership. It has been stolen by a cruel archmage. We are the hero that needs to retrieve this crown and save the neighboring countries from an invasion of the archmage.

There are four novels in the Sorcery! By Steve Jackson:

It is a very cool game novel series and I rate it a solid 9 out of 10. I do need to say, you have to be a fan of the whole choose your own fantasy adventure genre. The magic system is great, but you need to resist the urge of cheating to have the most fun playing this fantasy pen and paper gamebook.

Lone Wolf is a gamebook series that started out in 1984 and is still going strong! The 31 volumes have sold 12 million copies in total, making it one of the most successful books ever in the genre.

Our story takes place in Magnamund, where a classic good versus evil battle is going on. Our protagonist is the Lone Wolf, a warrior monk. The adventures of the lone wolf are told as if the reader is the hero.

I absolutely love this series and it is well deserved on the number one spot. It has won multiple Game Book of the Year prizes and has a massive community with loads of adaptations, even a tabletop game. If you want to read an all-time great choose your own adventure fantasy book, you can´t go wrong with Lone Wolf!

The Choose Your Own Adventure series is one of the most popular and influential children’s book series of all time. With over 200 million copies sold, the series has been translated into 40 languages.

The books have had a profound effect on readers, who often feel empowered by the ability to choose their own adventure. Choose Your Own Adventure books offer a different way to tell a story and allow for an unprecedented level of reader interactivity. They are interactive, immersive and empowering.

How does choosing your fantasy adventure work in a book?

Choose Your Own Adventure books offer a different way to tell a story, and the reader is the hero. At the beginning of each chapter, readers are presented with a choice between two or more paths. The narrative branches from there, with some paths leading to death and others leading to new chapters in which readers make new choices. This branching narrative can lead writers down multiple paths through the course of one story.

What are text adventures?

Choose your own adventure books are a series of children’s novels that allow the reader to choose the plot by following numbered passages. It is also called CYOA or “text adventures”.

Where can you read new fantasy text adventures?

Text adventures are interactive stories that you can read on your phone. They usually take place in a fantasy world with magic and monsters. They are designed so that the player interacts with the game by typing commands to move around and explore. It is a type of interactive fiction, which is a genre of video games in which players use text input to control characters and progress through the story.