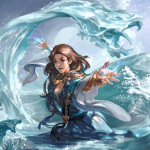 What is Water Weird 5e: mechanics and requirements

Invisible in Water. The water weird is invisible while fully immersed in water.

Water Bound. The water weird dies if it leaves the water to which it is bound or if that water is destroyed.

1. The Guardian of Water

If you are trying to teach your players a lesson on respecting Mother Nature, you can use the Water Weird for your next session. The Water Weird could be made to be a guardian and be hidden where they are bounded, whether a lake, river, or other large body of water. While keeping the waters safe, the Water Weird continues forth, protecting and attacking anyone who tries to enter or disturb the water.

This makes for an interesting encounter as it offers the party to not necessarily use force to deal with the elemental creature but to seek out a more peaceful approach.

A dungeon is a classic location for an exciting Dungeon and Dragons encounter. Amid the dungeon’s dark passageways, the Water Weird can be encountered in a submerged section of a dungeon, as it uses its ability to be invisible in water.

Given its sense of blindsight of 30 ft., the Water Weird can track down and stalk its next victim without the need for sight. This provides a unique challenge for players navigating the flooded area.

May it be a pesky spellcaster who has summoned this elemental creature from the Water Plane. The Water Weird can serve its master’s purpose and wreak havoc upon the land. For example, the Water Weird could set out to cause chaos in a town or village by flooding areas or attacking people.

Causing the players to investigate and stop the creature’s rampage. The Dungeon Master can potentially hide the Water Weird within the settlement in locations such as sewer, well, etc. This can add mystery to the party member’s investigation as they venture out to put a stop to the culprit behind it.

In conclusion, the water weird is a unique and formidable monster that can provide an interesting and challenging encounter for players in a Dungeons and Dragons campaign. Its ability to control water and discreetly hide underwater makes it a formidable opponent. Still, its restrictions to water and limitations to its attack move make it possible for players to find ways to defeat it.

As a Dungeon Master, it can be fun to incorporate the water weird into a water-themed encounter, whether it may take place at a lake or river, or you can even have it as a guardian of a body of water. Just be sure to consider its strengths, weaknesses, and motivations when designing the encounter. With careful planning and creativity, the water weird can be a memorable and exciting addition to your campaign.

Can a Water Weird be attached to a Water Elemental?

Yes, since the Water Elemental is made up of water, a Water Weird can be a part of it. This is because Water Weirds can be bounded to any specific water-filled location.

What is the difference between a Water Weird and a Water Elemental?

Can the Water Weird use constrict for an attack of opportunity?

Yes, you can use the constricting action of the Water Weird during an attack of opportunity. All of the attack action’s features would still apply.

Can the Water Weird constrict more than one target?