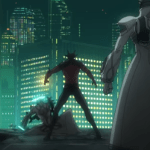 Every manga needs a bit of spice, and what better way to induce that spice than to have the main character become a literal destructive monster? Having a transforming MC makes up for many exciting and unique storylines, as you can see with how popular this genre in particular is. So, without further ado, let’s begin with our list of 8 manga we handpicked for you from this intriguing and famous genre. Starting with no. 8, we have:-

Yuuya Nomoto is a college student who isn’t thrilled to go on a trip that is a bit more than just casually picking up girls with his friends. Unfortunately, it turns out they meant kidnapping girls, and it really doesn’t go as well as planned because Hitomi Uzaki, one of the kidnapped girls, turns out to be a Therianthrope, which are human-animal hybrids created by advanced gene therapy, and thus, the kidnappers become pretty much badger food as they are brutally murdered.

Now that Yuuya is involved in this little fray, Hitomi is tasked to protect him while participating in underground blood sports matches known as Killing Bites. All of this is part of a proxy war between 4 of the largest conglomerates in Japan, with the prize of complete control over the Japanese economy. Read the manga to find out how Yuuya fares in this scenario mess.

Sometimes people don’t die when they are killed. The next manga on the list is an Isekai manga, as our protagonist, an ordinary salesman, dies in a car crash as the couple makes out in the car instead of driving. Got their priorities straight, haven’t they? He was supposed to pass on after the crash, but was reincarnated in another world and a fearsome and extremely powerful dragon nonetheless. However, being an evil dragon isn’t as easy as it looks because everything that moves is trying to kill you.

One of these adventurers who set out to kill him is a girl named Kuroe; she is quite persistent as she returns after repeatedly losing. Finally, after one loss, they both have a bit of a conversation about stuff, and it just so happens that the evil dragon, named “Ja,” sets out with her to town for a journey. So begins the tale of an evil dragon exploring the world.

Next up is another tale where the main character dies in the first few pages, and this time the cause involves a girl. A giant monster is attacking a girl named Tokiko, and as a decent human being, he gets in the way and dies while trying to save her from the attack. Instead of sleeping eternally, he wakes up the next day, concluding that it all might have been a dream. But it turns out his death, along with everything else, was real.

The girl was trying to slay the monster, otherwise known as a homunculus, but our protagonist, Kazuki, just had to play the hero part. So, to save him, she replaces his dead heart with a Kakugane, which comes with the perks of giving him the ability to summon a lance with which he can fight those monsters and, well…not die in the process. The device is apparently of alchemic origin, and Tokiko herself is a member of the Renkin Kenshi, alchemist soldiers who try to fend off nasty creatures from the general public.

One thing leads to another, and in the end, Kazuki decides to help Tokiko in her cause to catch the man behind all these homunculi.

Evil lurks in the shadows, and the evildoers are called “Akuma.” Their leader, named Millennium Earl, has one mission. His mission is to destroy the fragments of “Innocence” that can harm him and his fellow Akuma and lie in the hands of people gifted by God.

To stop these guys in their tracks, the Black Order was formed. It comprises people that can inherently accommodate Innocence in their bodies and thus are referred to as Exorcists. In the late 1800s, a boy named Allen Walker came to the Order. His power: a cursed eye that can see Akuma and “Innocence” that takes the form of his entire left arm.

After coming to the Order, the boy finds many people, companions in his journey to end Earl and his plans once and for all. But, unfortunately, he plans on doing it with the other members of the Order, namely Kanda, Lee, and Levi. These four have a long way to go before they can succeed in their mission, so give this one a read, as it’s a thrilling story.

It is the 21st Century, and humans are trying their best to start a space program and move to Mars. But the harsh conditions of Mars don’t make it any easier for them. So scientists have been tasked with somehow making Mars’ atmosphere bearable for humans. After much thought, they decided to send cockroaches with some mold to Mars.

The plan was for the cockroaches to die and act as food for the mold. It is finally 2577, and humans have enough resources to move to Mars. They awaited a somewhat green Mars with vegetation. But to their surprise and horror, there is no vegetation on Mars, but rather they find Humanoid cockroaches, which kill them all rather than welcoming them. The moral of the story is that you should always send a car in space, not cockroaches. Before they die, they can send a distress signal back to Earth.

In response to this, some of the most elite warriors are dispatched to fight them so that they can take back Mars from these monsters. It is a great story with a very unique and interesting concept.

Jin Kanzaki looks like a very regular boy, but there is a secret that he keeps hidden from everyone. He may look ordinary, but he has been blessed with superhuman strength. He uses his strength to help everyone for a price, that is. You see, it was Jin’s Grandfather’s idea that he helps everyone in need, but Jin doesn’t like that. So each time he helps someone, he charges his Grandfather 10000 yen. I would gladly do it, too, if I get that type of money.

However, one day Jin’s entire life gets turned around. He meets a creature named “Player,” who is suspected of having played a part in a series of mysterious murders. Jin tries to investigate this case further. During this investigation, he sees a few mysterious individuals who are on a hunt for a man with a ring-shaped mark on his hand. Jin might be the only one who can solve this mystery and unravel all the secrets surrounding these murders. It is a great story and has taken a lot of inspiration from Devil man.

Atsushi Nakajima is an orphan who has now been kicked out and has nowhere left to go. Everything seems to be going downhill for him. Still, his life sparks up when he saves a drowning man named Dazai, who then offers him food and reveals that he and his partner work for the Armed detective agency along with the fact that the organization takes care of the stuff that the authorities cannot as the organization has various gifted individuals in its arsenal.

Atsushi then reluctantly helps the duo track down a supernatural tiger that has disturbed the sleep of many in the city with its havoc. After the case is solved, he is offered a job at the agency, but things are about to get spicy as the Port Mafia starts moving against them. Now that he is in the middle of this fiasco, Atsushi must muster up some courage and master his special ability to protect himself and the entire city.

MCs transform into many things, whether it may be girls, ghosts, or dragons, but a man transforming into a chainsaw will be a first for you. Denji is one such individual. After failing to achieve anything worthy of note and being homeless and destitute, his sole purpose in life is to touch some breasts and hug someone. Still, he tries to make do with what he has as he uses his trusted pet Pochita to kill devils and fulfill his contracts with the Yakuza to pay off his crushing debt.

But now that Denji is no longer as useful to them, he is killed by one of the devils in a contract with the Yakuza. However, he doesn’t die just yet as his favorite pet Pochita merges with him and grants him a new life and the power to turn various parts of his body into chainsaws.

Now that he’s a partial devil himself, Denji is hired by the official devil Hunter bureau. His boss is a beautiful girl named Maxima, who promises him ample food and treats him more kindly than others. And so begin Denji’s adventures and his new life at the bureau.