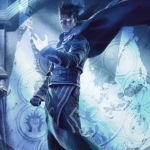 We have been going in-depth into wind spells for the last couple of days, and today will be no different. In this 5e guide, we are taking a closer look at Warding Wind. In my opinion, this second-level evocation is an often-overlooked spell that deserves a bit of love and is pretty underrated.

We hope to shine more light on a spell that too many people do not even consider. While Warding Wind 5e does not deal damage, creative players will find out that it is strong and valuable in many situations.

A strong wind (20 miles per hour) blows around you in a 10-foot radius and moves with you, remaining centered on you. The wind lasts for the spell’s duration.

The wind has the following effects:

Four classes can cast the Warding Wind in 5e DnD. These are 1. Bard 2. Druid 3. Sorcerer, and 4. Wizard. All of these can benefit from having the spell in their arsenal, but the second slot is highly contended by many other strong options for the Wizard and Sorcerer.

Do not underestimate just how good deafening can be. A deafened creature can’t hear and automatically fails any ability check that requires hearing. So it allows you to sneak past them but also makes communicating between monsters without telepathy hard.

This effect is also interesting when for role-playing situations where you want to make sure a target does not hear what you are saying or if you want to lock off an area sound-wise.

Like Gust of Wind, you can use the Warding Wind spell to blow out candles, torches, and lanterns. Doing this is often a good option when your character has darkvision, and your opponent does not. However, while the spell does extinguish flames, it only works on flames smaller than – or of equal size to – a torch. So you won’t be putting out the flames of a burning building.

There are quite a few spells in 5e DnD that the change of wind can counter. The most obvious example of this would be Cloudkill. You can simply use this level 2 spell to swat away the poisonous fumes of the spell and redirect them toward your enemies or to a safe place.

A couple of other spells might also be affected by this. An example of this would be color spray 5e. You do need to ask your DM if he agrees with this lax interpretation of the rules.

Mess with the movement of enemies

One of the more interesting uses of Warding Wind is that it turns the area of effect into difficult terrain for creatures besides yourself. So you can still move as if there is no wind, but creatures, including your allies, have their movements severely hampered.

Remember that the spell also works in the air and thus affects flyers like the Faerie Dragons. Similarly, the spell works underwater if you find yourself in a weird situation.

Protect yourself from projectiles

A smart DM can wreak havoc on a party with projectiles and sneak attacks. The Warding Wind is a great spell to protect yourself from attacks like Magic Stone and old-school spears, weapons, and arrows.

There are so many spells to choose from in DnD 5e that it is hard to start ranking them. Warding Wind is nothing special and is an average spell in most instances. However, there is quite some competition for the second spell slot, so you won’t find this spell on a max DPR build.

If you are a creative player looking for a more fun campaign that relies on role-playing and where damage and optimizing builds is an afterthought, then Warding Wind is a ton of fun.

Check out our best level 1 class guide in 5e DnD to get the most out of your first playing session!

Can you dismiss Warding Wind?

Yes, you can use an action to dismiss the Waring Wind or break your concentration to have it dispelled automatically.

Does Warding Wind target the caster?

No, the caster is unaffected by the effects of the spell. So you will not experience slowed-down movement or deafness.

Is Warding Wind a concentration spell?