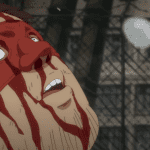 Doroheroro is set in an interesting world where the strong prey on the weak, and death is quite common. Manga like Dorohedoro is fascinating with the dark aspects that will haunt you in your sleep. So, if you’ve read the series and are looking for similar manga like Doroherdoro, we have covered the top 12 best manga you should read.

In Golden Kamuy, the story is set in the 1900s after the Russo-Japanese War era. Saichi Sugimoto tries to find pans for golds, and he’s known as “Sugimoto the Immortal” due to his careful and death-defying acts in battle. Sugimoto used to be a soldier; however, to become rich, fulfill his promise, and end all the troubles in his life, he sets on a journey to find fortune. Sugimoto’s best friend died in a battle, and they both promised each other to find treasure.

One day, Sugimoto hears a story about gold being hidden somewhere in Hokkaido. Initially, Sugimoto thinks that it’s all just a fad. Then, however, an interesting twist happens, and he ends up saving a young Ainu girl called Asirpa, whose father got murdered. Together with Asirpa, they formed a team, and thanks to her hunter abilities, they vowed to find the hidden treasure.

Even though both mangas have different settings, the main similarity comes when we compare the dark humor and gore. In addition, both series contain great fights, and the serious moments will leave you sad for days.

Another similar aspect of Dorohedoro and Golden Kamuy is that both main characters are curious about something. Kaiman from Dorehedoro is interested in knowing what turned his body the way it became, and Sugimoto is curious about all the treasure hidden in Hokkaido.

The world is dark, with zombie-like creatures called “Ghouls” lurking everywhere in the shadows. Ghouls are creatures that prey on humans to become stronger and eliminate hunger. The Commission of Counter Ghoul has been created to stop the Ghouls’ attacks, but they’re already having problems since Ghouls can disguise themselves among human beings.

The main character, Kaneki Ken, goes on a date with a beautiful woman to find out that she’s a ghoul. After almost getting eaten, he somehow survives due to heavy materials falling on themselves from the construction sites. However, Kaneki discovers he’s now a half-human and a half-ghoul. Unable to satisfy his hunger, he sets on a journey to get rid of all the ghouls and become a normal human being.

But as he thinks his new life will be peaceful, he finds himself in a war between ghouls and the CCG forces, which makes him drawn into a very weird situation. Kaneki must fight for justice with his friends and save the world from those dangerous ghouls.

The plot is set in a post-apocalyptic world where humans, robots, and cyborgs live together in Scrapyard. This garbage city is made on top of the city of Zalem, where the inventor Ido finds a cyborg in very bad shape. He gives the cyborg a new body and calls her Gally. As Gally had no memory of the past, it was difficult to work with her. However, she showed excellent martial arts skills called Panzer Kunst.

Gally has to relearn all her life’s lessons as she travels through a bleak and dark world. She has no idea where she came from, and she sets on a journey to find herself and solve the mysteries of Zalem.

Both series have a very dark setting where the main characters try to solve their mysteries. The curiosity factor is huge, and both Kaiman and Gally don’t know what happened to them.

Moreover, the artwork is quite similar to each other, and the action is unlike anything you’ll see.

The world is led by corrupt leaders who cause the death of many people worldwide. Crime and corruption are common, and the rich get richer every day. Throughout the capital city, things are getting intense, and this is where Tatsumi, our main character who wields a sword and considers himself in power, wants to change the world by changing the government system itself.

Tatsumi joins an organization called Night Raid, which wants the best for the capital and wants to improve the capital city’s overall system. In addition, night Raid wants to get revenge on Minister Honest, who is behind all this trouble.

Akame Ga Kill has quite a lot of violence, just like Dorohedoro. Both series have unique and interesting power systems, and just like magic users in Dorohedoro, Akame Ga Kill is also about various groups fighting each other.

The mystical Abyss is home to terrifying creatures called “Chains.” Many people believed it to be nothing more than a fairy tale said to children who would misbehave. However, Oz Vessalius, a cute boy and heir of the noble Vessalius family, is a Chain.

At his coming-of-age ceremony, the Baskerville Clan arrived and blamed him for a sin he never created. Oz forms a contract with Alice, who is a unique chain, all to escape the Abyss and run away from everyone. Oz gets quite confused about all the allegations that were made against him. However, this turned out to be a tragedy 100 years ago. Oz must fight the monsters and ghosts from the past to make himself come clean and return to his home in this manga like Dorohedoro.

The mystery aspects of both Pandora Hearts and Dorehedoro are quite similar. Both characters are still tied to their past and have to solve some mystery to turn normal.

Staz is different in the world of vampires. Unlike vampires who feel superior to humans, Staz is obsessed with human cultures, video games, mangas, and anything about the real world. Staz is also the vampire boss of his area and is respected by all the vampires.

Staz’s only desire is to visit the human world and gather as many mangas and video games as possible. One day, a human girl accidentally comes into his world and is eaten by a plant. Now, she becomes a cute ghost, and Staz is quite impressed to see a human in his city. Together, they vow to bring the girl’s body back and resurrect her while completing many difficult tasks with no motivation to work at all.

Both Blood Lad and Dorohedoro have similar worlds. However, Blood Lad is quite less disturbing, and a lot of humor is also involved. All in all, the mystery aspects of both series are the same, which makes the manga like Dorohedoro quite similar to read.

Guts are out to get his revenge on the world. After a traumatizing childhood, he finally got to know someone who he could trust and get his revenge with. So he leaves behind everything he has and trains to become the strongest warrior in the world. Unfortunately, now marked for death, Guts has a bad fate where he’s being pursued by demonic creatures that want to take his life away.

Guts has monstrous strength, and nothing can stop until he can fight and kill the person who took his whole life away from him.

Both main characters are violent and are pursuing a mission to reach their ultimate goals. The medieval fantasy world of both manga series is similar as well. So if you’re looking for fun and even more badass manga like Dorohedoro, Berserk is the way to go.

The story starts with Rintaro Senkawa, a regular young guy in his mid 20’s. However, after drinking one night, he died. However, as he wakes up, he finds himself in hell, where he meets a cute devil named Koyori. The main thing is whether Rintaro will be able to consider his situation and repent for all the sins from his previous life or get tortured by devils and iron-spiked clubs? It’s all on him to choose.

Both series start in a world similar to hell, and the gore aspect is identical. The hellish theme can make or break the series, but you will love the overall Anime with both of these mangas.

Denji wants to live a peaceful and financially free life with a girl of his liking. However, he’s being forced by the Japanese Yakuza into killing devils so he can pay the debt that his father left. By teaming up with his pet, Pochita, as a weapon, Denji is ready to fight all the monsters in the world for a small amount of cash.

Chainsaw Man and Dorohedoro are brutally similar to each other thanks to the identity of both main characters. The series is set in a dark world with brutal monsters and a lot of dark comedy, which will make you laugh.

While the world of this manga is filled with anthropomorphic animals, carnivores are also there as an exception. These mindless predators would do anything to thrive in the world, and as Tem, an alpaca got murdered within the school walls, fear fell into the world.

Legoshi is a school student, a gray wolf, who is quite socially awkward while being ferocious in his appearance. However, things get quite intense when he has to choose a side and fight for justice.

Dorohedoro and Beastars seem like the same manga to most of the people out there. The plot might be drastically different, but mangas’ animation and overall setting are the same.

After a brutal war, many “EXTENDS” are left in the city. Extends are just human cyborgs whose bodies were modified, and they were turned into dangerous weapons to win the war. Inui Juuzou is a product of one of the experiments.

Without any traces of his memories and previous life, he’s been turned into a gun. However, his head gun is designed so that only someone from behind can pull the trigger and control the tide of the battle.

Juuzou earns money while taking on cases involving Extends in the city, and he is usually assisted by Mary, a young woman he’s taken under his wing. A must read manga like Dorohedoro.

Both main characters have amnesia and look different from everyone. However, their partners are also quite identical, and the theme of both mangas is the same. There’s a lot of mystery to unfold in No Guns Life and Dorohedoro, which makes the manga quite similar.

Number one on our list of manga like Dorohedoro is BLAME!. In BLAME! The world is filled with dangerous and terrifying creatures that force humanity to leave and hide in small enclaves while trying to fight and survive the creatures every single day; even though all humans are scared of the creatures, a young guy known as Killy decided to get his revenge on the creatures and make the world a safe place for humans to live.

As Killy possessed superhuman strength and a Graviton Beam Emitter, he could easily fight the beast and destroy them in one go. Unfortunately, Killy not only kills a lot of creatures but also meets people with the same goal as him. He soon learns about the true nature of things and how much he needs to improve to save the world.

The first similarity between both series is the artist. Did you know that the artist of Dorohedoro was an assistant to Tsutomu Nihei, the author of BLAME!? Things get even more interesting when we talk about the anti-heroes, magic, and humor. Both Anime are quite similar to each other in a variety of ways.

Dorohedoro is such a gem of a series that recommending a similar manga can get intense. However, we covered 12 mangas that you can read if you liked Dorohedoro. So let us know which manga you are going to read next!