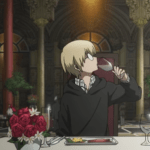 Released in 2016, Bungou Stray Dogs became one of the favorite mystery and action anime worldwide. The mystery, comedy, action, and overall detective aura of Bungou Stray Dogs make it a rather interesting series.

Don’t worry about fans who like Bungou Stray Dogs and want to watch similar series, don’t worry because we’ve got you covered.

Tokyo Ghoul follows the story of Ken Kaneki, a college student who survives a brutal and deadly encounter with Rize, a beautiful woman who was hiding as a ghoul. After the incident, Kaneki is taken to the hospital, and after recovering, he realizes that he went into surgery and became a half-ghoul. This happened because Rize’s organs were transplanted into Kaneki since she couldn’t survive, but the doctors decided to save Kaneki with her organs.

Now, like normal ghouls, Kaneki has to devour human flesh to survive, but he’s in absolute depression and disgust. However, the ghouls who manage a coffee shop decide to take him and teach him how he can handle his half-ghoul side for the best of human society.

The anime then follows the daily struggles of Kaneki as he transitions into a ghoul while fighting for his life. Tokyo Ghoul follows the same level of mystery as Bungou Stray Dogs, making it quite a similar anime to Bungou Stray Dogs regarding the overall setting, animation, and characters’ personalities. Tokyo Ghoul is also considered to be one of the best completed anime of all time.

In the world of Noragami, when someone is going through deep trouble, if they look close enough, they might see a number in red. After calling this number, the person will hear a young man introduce himself to be the Yato God. Yato is a minor deity and calls himself “Delivery God.”

He boasts of having a plethora of worshippers, and without any shrine that remembers him, he doesn’t take it on his ego but realizes that his goals are still to be fulfilled. Yato likes doing odd jobs for only 5 yen until his partner leaves him for being so bad.

Just as the Delivery God is going into self-pity, he meets a middle school girl named Hiyori, who saves Yato from a car accident. Unfortunately, she takes a hit on him but surprisingly survives. This is later revealed that she should leave her body.

This makes Yato do anything to turn her back to normal, which creates a cute relationship between them. However, by meeting Hiyori, Yato’s luck might change, and he’s excited about it. Noragami resembles the anime Bungou Stray Dogs in a plethora of ways. Firstly, when he’s serious, the main character looks quite the same as Atsushi from Stray Dogs, and finally, the overall setting is similar too.

My Hero Academia focuses on a middle school student named Izuku Midoriya. The world suddenly started developing superpowers known as “Quirks,” and this is a power that a wide variety of people possess. But those who don’t have a quirk are known to be weak and are often discriminated against.

However, a school named The Hero Academy is known to train people to become the next heroes. The central premise is that the heroes in the world of My Hero Academia save ordinary people from all sorts of thefts and troubles.

Moving back to Izuku Midoriya, he’s one of the most passionate persons in the world, but as he grows up, he realizes he has no superpowers. His whole life is turned into a living hell after he learns he cannot have a quirk because he’s just not got it.

But will Midoriya get a quirk? And if not, how will he work around the issue? There’s so much mystery to be unfolded.

My Hero Academia is quite similar to Bungou Stray Dogs because Atsushi and Midoriya are spitting images of each other. Moreover, both find mentors in their stories that save them from becoming the worst version of themselves.

The anime tells us a story about a vampire known as Vanitas. Being hated by all the other vampires for being born under the full blue moon, he creates a Book of Vanitas, a cursed book that would take revenge on all vampires one day.

The story follows Noe, a young man traveling in Paris in the 19th century intending to find the Book of Vanitas. However, a sudden vampire attack takes him to meet the deadly vampire named Vanitas, a doctor specializing in vampires.

The doctor looked excellent and had inherited the name and book from Vanitas, the legendary vampire. Now he uses his powers to heal patients and keep them out of trouble. However, to Noe’s surprise, some secrets are much more profound than how things look on the outside.

Vanitas No Carte and Bungou dogs are similar anime to each other due to the mystery vibes and the action-filled adventure.

Takemichi Hanagaki lives a life of absolute depression. He works as a minimum wage worker and despises his life for being too dull as he grew up. Because when he was younger, he used to be a delinquent and a chill person.

However, one day, he discovers that the only person he used to like in his childhood, Hinata Tachibana, has died. The day after hearing about her death, he’s standing at the train station but is suddenly pushed onto the tracks by a big group of people accidentally. This is where he leaps back and finds himself 12 years in the past. Now, he’s ready to live his best days while trying to find out what would kill her.

The personalities of Atsushi and Takemichi are almost the same. They both get worked up on minor things, making them identical. This is why both anime have similar mystery, action, and character settings.

Sixth on our list of anime similar to bungou stray dogs. Charlotte follows the story of four students that live in an alternate reality from a famous Hoshinoumi Academy. This school was built to protect children with special abilities developed during puberty. The academy is also responsible for finding other kids with the same skills.

The main cast includes Yu Otosaka, a boy who can control other people but only for 5 seconds when he looks directly at them. Then we have Nao Tomoro, who can become invisible to the person she chooses. Next, Jojiro Takajo can move quickly, which makes it look like he’s teleporting. And at last, we have Yusha Nishimori, who her dead pyrokinetic sister possesses.

Being in the academy, our main characters find a lot of hidden secrets that force them to take charge and fight for their life. On the other hand, Yu has one of the deadliest abilities he can use to possess someone. So what are the challenges awaiting our main characters, and will they even be able to fight the bad guys? You’ll need to find out.

Charlotte and Bungou Stray Dogs have much more in common than it seems. Like Bungou Stray Dogs, our characters in Charlotte have to fight with the organizations to survive and bring peace into their world. Moreover, both Yu and Atsushi have something deep hiding inside them that is dangerous and intimidating.

Psycho-Pass tells the story of Shinya Kogami, a former inspector trying to hunt for his arch nemesis, Shogo Makishima. Akae Tsunemori is assigned as his superior in the new criminal investigation department division, where he must follow her to keep his career going.

Their main goal is to fight the infamous Shogo Makishima and fight him using their special powers and bring him to justice. The relationship between Akane and Shogo makes Psycho-Pass so similar to Bungou Stray dogs. Their beautiful bond together is identical to Dazai and Atsushi.

Darker than Black is an anime similar to bungou stray dogs in so many ways. The story blabbed about ten years ago, an abnormal territory called the Hell’s Gate opened in Tokyo, and it changed the sky, destroying everything. The world had false stars, and some people with supernatural abilities were known as Contractors during this time. The public doesn’t know these Contractors, but they can murder in cold blood.

Many companies are using Contractors to get their jobs done, resulting in a heavy battle. They come as agents, spies, and much more to fulfill their mission, get the money, and leave.

Amongst the supernatural contractors, Hei is one of the strongest, along with Yin, who is his blind support. They work together to defeat many rival agencies to unlock the mysteries caused by Hell’s Gate.

Darker Than Black and Bungou Stray Dogs are similar because both anime have a substantial mysterious aspect that the characters try to solve. But, unfortunately, there’s too much to solve, and the main characters have something deep in them that they’re worried about.

Kekkai Sensen takes us to a world where ordinary and unordinary people exist. There’s an organization called the Libra that battles ordinary or supernatural people to make sure that the world has peace. But one day, the city of New York got trapped, and all the people were stuck in New York.

Many creatures started coming and destroying many things, raising the concern for security. Now, our heroes need to stick together and beat the creators, get to the root cause of the problem, and ensure that no one gets hurt.

In Tokyo, there’s a rumor that dangerous gangs and occupants are everywhere. The existence of the headless Black Rider, who is seen to be riding the black motorcycle in the streets, is confirmed.

This is where Mikado Ryuugamine goes to Tokyo after moving from his village at the request of his childhood friend. After seeing the Black Rider on the first day, his wish already comes true. However, after that incident, the supernatural events start as everyone loses their mind, and there’s commotion in their city.

Durarara has a high level of confusion and supernatural moments, just like Bungou Stray Dogs. The main characters are also very relatable and confused about their surroundings most of the time. All these aspects make Durarara a very similar anime to Bungou Stray Dogs.

Kemono Jihen tells us a very creepy story when a series of animal bodies rot away in a village overnight. After the incident, Inugami, a detective from Tokyo who specializes in demons, comes to the site for investigation and finds something beyond fascinating. As he was working on the case, he came across a boy who worked every day in the form instead of playing or going to school.

He is also called Dorotabo by his friends. They soon make a great bond together and finally discover the reason behind all the killings. But unfortunately, it wasn’t quickly explained that some supernatural forces were at work. And even though Dorotabo was just the boy’s nickname, there’s so much that Inugami has to unfold and look into before he can finally close the case and go back to Tokyo.