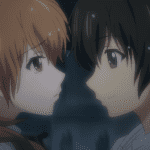 So, if you are looking for something that can brighten up your day, sit tight because, by the end of this blog, you will find the best romance anime for yourself. So, without any further ado, let’s get started with the list of anime where they kiss multiple times!

10. Chivalry of the Failed Knight

Chivalry of a failed knight is one of the best anime with action/fantasy. Its romance elements make this anime even more fascinating.

The story revolves around Ikki Kurogane, an ordinary guy with no magical skills. He is regarded as a failed knight because he doesn’t possess any magical abilities. Then, one day, his life flips when he meets an A-rank student named Stella, known to be a genius.

Circumstances pushed Ikki into a duel with Stella, and the loser must serve the winner for the rest of his life. So, what are your thoughts? Who is going to win this battle? Find out by watching one of the best anime where they kiss more than once!

Golden time is a romance anime with a great blend of drama and comedy, well known for its smooth romance. No wonder it makes our ranking of best anime where they kiss more than once!

The plot revolves around the story of Banri Tada, a kind-hearted guy who lost his memories after a tragic accident. The accident was so severe that he could no longer remember his hometown. However, his life takes a new turn when he meets Mitsuo Yanagisawa, a freshman at a private law school just like him, and Kouko Kaga, Mitsuo’s childhood friend. After adjusting to his college life, he realized that he could flip a new page in life by making some new friends.

This anime is perfect if you want a slice-of-life anime with romance elements. Moreover, the heart-fluttering moments of this anime will melt your heart. So, what’s the wait for? Start watching this anime where they kiss a lot right now and make your evening wonderful.

Date a live is a harem, romance, and fantasy anime that will put a smile on your face with its light comedy. In addition, it has a surprisingly developed plot that you shouldn’t miss.

The anime revolves around the story of an average high schooler named Shidou Itsuko. His life changes when he gets caught up in a cataclysmic event trying to save his sister Kotori Itsuko, only to find a strange girl who turns out to be a spirit. He soon learns that her sister is the commander of these spirits causing quakes.

Ratatoskr (an organization created to save spirits) then hires Shidou to seal the spirits and prevent them from being a threat to humans, but for that to happen, Shidou must make the spirits fall in love with him (that’s a weird condition.)

So, how can our MC make a spirit fall in love with her? Let’s find out by watching this anime where they kiss more than once.

Rosario to Vampire is a romance anime that you will surely love if you are a fan of anime where humans and vampires co-exist in a society.

The story begins when Tsukune Aono’s parents enroll him into Youkai Academy, a school for monsters, as the last struggle to save his education. Tsukune imagined living a wonderful school life, but when he arrived there, he was shocked.

On his first day, he encounters Moka Akashiya, the most attractive girl on campus and our Vampire MC, and decides to stay in school forever.

Although the school rules suggest that any actual human should be executed if found on school grounds, Tsukune eventually chooses to stay in the school to advance his relationship with Moka. Still, little does he know that underneath this beautiful face lies a dangerous monster which comes out when they kiss.

What will our MC do when Moka reveals her true self to him when they kiss? Unfortunately, we don’t know that yet.

Scum’s wish is a romance anime that tells us the disturbing reality of today’s world. People take each other for granted, and that’s the worst part of any relationship.

The anime revolves around the story of Hanabi Yasuraoka and Mugi Awaya, a couple who are in love with two different people that they can’t be with. They met each other by chance and agreed that they would satisfy each other’s needs by sharing physical intimacy while imagining the ones they love (OUCH). This is an anime where they kiss multiple times, and more…

What will become of them in the end? Are they going to live like this for the rest of their lives? Check this fantastic anime where they kiss more than once to discover more.

Sword art online is an action/fantasy anime with an OP MC like overlord and with a virtual reality gaming theme. It’s well known for its fight scenes and cute romance where they kiss more than once.

A new game launched after the invention of a device called nerve gear. This device allows gamers worldwide to experience a mesmerizing virtual reality. Sword Art Online, a new VR game, quickly becomes a sensation because of its beautiful scenery and incredible landscapes. But the joy becomes a nightmare when the players find themselves trapped inside it.

Our MC was excited to live in this new reality, but the chaotic world of SAO was too much for him to handle alone. So, he teamed up with a reasonably talented player, Asuna Yuuki, and started his journey. Together, they might find a way to clear this game for better or worse.

Is it possible for the newly formed duo to escape this strange world? Keep an eye on this anime to find out.

4. Darling In The Franxx

Darling in the Franxx is a science-fiction anime well known for its action and romance elements. There is also a ton of technology and magic like elements.

The plot tells the story of Hiro, who lost the motivation to be an aspiring Franxx after failing his aptitude test. Instead, he coincidentally encounters a monstrous girl with horns calling herself “Zero Two,” who happened to be known as the famous “Partner Killer.”

A sudden Klaxosaur attack pushed them to team up and defeat the enemy. With this new partnership, Hiro seemed to regain his lost confidence and make up for his past failures, but what price will he have to pay for this?

If you crave a heart-wrenching story and an anime where they kiss more than once with an exciting plot, then there is no better anime than this one.

Kaichou wa maid Sama is a classic romance anime with many kawaii Moments. Maid Sama is one of those anime that forces us to experience love life precisely as our protagonists did in the anime.

Misaki Ayuzawa is the first-ever female student council president in a male dominant school. She’s well known for being stern with the guys, which got her the title of demon president. However, Misaki has a soft side when it comes to girls struggling. He couldn’t tolerate it when she saw a guy, Takumi Usui, rejecting a girl’s confession and making her cry.

Usui coincidently ended up at the maid cafe where Misaki worked, which was Misaki here worst nightmare. He is kind of a bully (in a good way) and started to visit the cafe frequently to tease her. Misaki promised herself not to let him destroy her hard-earned reputation, but when the time calls, will he stay quiet?

2. Yamada-Kun and the 7 Witches

Yamada-Kun and the seven witches is a harem anime with supernatural, romance, and comedy elements. This anime revolves around the story of Ryuu Yamada, a problematic guy.

He is a delinquent and has a bad reputation in his school, but he was tired of living like this and decided to start a new life by joining a new school where no one knew him.

But soon, he returns to his old ways and unexpectedly encounters Urara Shiraishi, an honor student. A misstep led them to a stair fall, which became an accidental kiss (why do such accidents never happen with me?).

As a result of the kiss, Yamada’s and Urara’s bodies have been swapped, and neither of them can return to their original forms. So what will they do now? Well, probably kissing, as this ranking is all about anime where they kiss more than once! So watch the anime for the kissing; stay for the plot!

On number one for our anime where they kiss more than once is High school DxD. High School DXD is a mythological romance fantasy with beautiful girls throughout the anime. It’s reasonably famous among its fans for the fighting and adult element. It also has a lot of the same vibes as misfit of the Demon King academy anime.

Issei Hyoudou is a good-for-nothing pervert high schooler who has nothing productive under his name. All he does is dream about having his harem. A pretty good premise if you are looking for anime with a lot of kissing. So Issei couldn’t believe his luck when he got asked out by a beautiful girl, who turned out to be a fallen angel, and he ended up brutally killed by her. But luckily, got revived by a senior student Rias Gremory, who is the top-grade devil.

Adjusting to his new life, Issei must learn how to fight and become strong while keeping his new life a secret from his family. But, will he succeed in keeping this secret? There’s only one way to find out.

There you have it, the best anime where they kiss more than once!