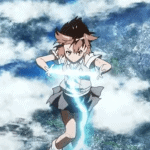 Anime with magic schools and ranking is famous for its unending fun. Seeing the MCs showcasing their magical powers in school gives pleasure. Deep down there, we otaku must have dreamt of a fantasy world with splendid magical powers.

We can still fulfill our dreams by relating to the main characters listed below in anime. So, let’s begin the list of best magic school anime with a ranking system.

A Certain Magical Index has captivating animation, and the anime sure knows how to keep the viewers glued to the plot. Kamijou Touma lives in a city where the students are ranked according to their power level, ranging from 0 to 5. To begin with, zero-level students are considered the weakest, as they lack elemental powers. Unfortunately, Touma lies at level zero.

Despite being labeled as the weakest our MC is a mage with a lot of willpower. He never stops when it comes to saving someone’s life. He has the power of negation that helps him negate any ability. I wonder why he is ranked zero? ‘The anime is filled with thrilling vibes and suspense. There are heavenly gorgeous and OP characters. The story becomes spellbinding after our MC meets a girl named Index, who is believed to have learned several grimoires.

His unique memory of hers attracts many dangers to her, but Touma vows to help this young girl. If you want to watch anime with magic school and ranking that has everything perfect from story to characters, then you can watch it.

Many viewers have given it a rating above 4.5. ‘However, some are concerned that the MC’s powers could have been high relative to the other characters. But mate, don’t you want to watch a not-so-OP guy competing with the OP guys? For a change, such a pick won’t be a bad idea, no? This anime is also one of the best dubbed anime with magic.

5. Chivalry Of The Failed Knight

Okay, guys, what if you can use your soul as a weapon? If you like the idea, you will be flabbergasted to see it happen! (indeed, in the anime!) The anime is set in a world where a few humans possess this ability, and all of them have different levels of their powers.

In an academy named Hagun, students are ranked based on their soul weapons, aka blazers. There happens to be a student named Ikki Kurogane whose blazer lies in one of the lowest ranks; it is an F-rated blazer. Exactly what we are looking for in a anime with magic and ranking system!

Contrary to them, those who are ranked A-rated are considered the strongest. The anime becomes fascinating to watch when our hero finds a girl named Stella naked, making things between both heat up. To teach him a lesson, Stella decides to have a one-on-one match with him. (poor, Ikki!)

If you enjoy watching magic school anime with fighting, then you will enjoy this one. There is comedy, action, and magic as a bonus. Do you have another wish? Watch this amazing dubbed anime with an OP MC, you won’t regret it!

4. Aesthetica Of A Rogue Hero

One of my favorite anime with magic and ranking system that a lot of people hate is Aesthetica of a Rogue Hero. The show with a male lead in a magic school occurs in a setting where many people go into a fantasy world. After spending some time, they returned to their world having different abilities.

Akatsuki is the protagonist who returned along with a girl named Miu. Oh yes, Miu isn’t your ordinary girl. She is the daughter of the demon king of the fantasy world.

Coming to the point, our protagonists join a magic school where you will enjoy ranking matches. It is an anime with a magic school and fighting, so expect some fantastic scenarios. Entertainment, handsome MC, and gorgeous girls are waiting for you to join them. Besides, it’s a short time, so it guarantees extra fun in a quick time!

I am sure you guys must have heard this name, right? High School DXD is an anime that gained popularity for the unique portrayal of magic-oriented action. The anime highlights the life of a spoiled student, Issei, famous for topping the lists of perverts. The anime is also on our list of shows where they kiss more than once.

He was enjoying his perverted life till he was offered a date. You got that right; provided by a girl out of the blue sounds fishy. On the date night, Issei experienced near-death scenarios.

The girl turns out to be a fallen angel; however, when Issei opens his eyes, he names the incident a nightmare. Soon our protagonist finds himself in another horrible event, but luckily, he is saved by a high-ranked devil named Rias. Finally, however, our hero’s life drastically turns when he finds that he now has to serve her.

The anime has a ranking system, but with a different concept. So, if you were looking for anime with magic school and ranking that has a touch of the harem, then dude, this is the one. You might also like the misfit of demon king academy or other similar anime.

This is another excellent anime with the magic and ranking school system. It is set in a world where everyone has magical abilities but differs from each other. Some have more powers, and some have less, depending on several factors.

Hence characters are ranked based on the respect they get, their traits, and some genetic factors. For example, Kazuki Shikimori is a boy who lacks magical abilities, while his ancestors have been known for the said abilities. Even though he is not good at magic, it’s believed that his descendants would have the same power.

There you go, now begins the intriguing part where our boy, despite lacking good skills, gets surrounded by several girls. Can you guess why? Some want to be his wife so they can have a powerful magician offspring, and others for different reasons.

You might find this anime’s animation not on par with your tastes because it’s an old anime. But, if you were looking for an anime that could make you feel nostalgic, you sure could try this one. Check out manga like Dorohedor if you are a fan of this show. Not just the names are similar, but the storytelling is similar in pace and a lot of humor is similar despite being so different.

1. The Irregular At Magic High School

There has the reason to be on the top of the list. It has been ruling the hearts of otaku for multiple reasons, the number one being its handsome protagonist.

Tatsuya Shiba starts weak but becomes OP, or else we can say he was overpowered right from the start and chose not to showcase his powers. He, along with his sister Miyuki, joins a magical academy. There they learn that Miyuki has been selected in the category of blooms.

Oh, let me make it straightforward for you guys. This school ranks the students based on their practical abilities. The ones who are good at practicing magic are ranked in blooms, while the weakest ones are ranked in weeds. Tatsuya intentionally chose to be a part of weeds by not performing well.

Nevertheless, fans admire this anime for its character development, suspense, action, and magic. So if you were looking for a great magic fantasy anime with a male lead, you have a reason to party.

Okay, my friends, I have listed a variety of anime with magic school and ranking. Here you will find anime with captivating characters, anime where the MC starts weak but becomes strong, and harem anime with magic and action. Do you have another wish? If yes, feel free to tell your genie in the comments below. I would love to fulfill your desires.