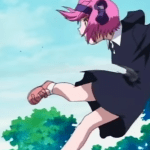 Hey, my lovely friends! I am back with some dark fantasy romance anime. This genre feels like a complete package as it combines three themes; dark, romance and fantasy. Otaku is a new race spreading like a fire over the globe, and each one has a different preference. Some wish to indulge in fantasy, while others enjoy the thrill of suspense and mystery.

Many want to feel the chills of horror, and then we have those who only like to enjoy their time with a blend of all. So, today, I’ll recommend the best dark fantasy anime to all those who love watching these themes. Let’s begin with our favorite discussion!

Lucy is the main female lead who is a combination of a badass killer and a sweet, lively soul. Because of split personality disorder, you’ll see her changing her personality from time to time. This girl isn’t ordinary but a Diclonius, a species different from humans. The plot begins with Lucy escaping from the Island where she was kept hostage.

The Diclonius are brutal and don’t care to kill others when required. However, the girl escapes successfully by eradicating everyone out of her way.

In the process, she gets hit on her head, resulting in the disorder. The plot begins with her being saved by lovebirds Kouta and Yuka.

Little did they know that this sweet-looking innocent girl could go wild at any moment. What happens next is a mystery for you to solve while watching. There is gore, bloodshed, action, and many dark themes. It’s a short 13-episode anime, so don’t worry about that!

The name of the anime fits the story simply perfectly. It is set in a world where there is a deep abyss, and fantasies are in the air about the adventure in it. Though the abyss is filled with mystery and relics, few know what lies inside it. White whistles are the only lucky ones reaching the bottom. One can go down but coming out of the abyss means death.

The plot’s main lead is a girl named Riko, whose mother was a white whistle. Listening to her stories created the same passion in her: exploring the abyss. Riko plans to escape with her robotic friend Reg despite being stopped by the higher-ups.

Their adventure was never easy, as each layer of the abyss was filled with horror and mysteries. The anime has a lot in store, and one enjoys the M.C.s exploring the depth of the earth. The thrill is a given in the anime with a constant push by curiosity, and you will be bewitched to watch the anime. I won’t say there is romance, but it focuses on the main leads’ developing love. Don’t tell me you are still waiting and thinking about whether to watch it!

It is set in a world where devils lurk here and there. They need a living host to get in control, but strong-willed people can control the devils instead. Such powerful beings are then named ‘Devil man”. Akira and Ryou are the series’ stars as they portray their bonds of friendship.

However, they are not the same but like the sun and the moon. Akira is a crybaby with a soft heart. One day, his friend takes him to a devil party on a mission to find devils. Unfortunately, things don’t go as planned, and the chaos forces the crybaby to fuse with the devil. The fusion ultimately makes him powerful, and he defeats all other devils who want to cause harm.

This moment began his journey, beating the evil demons to protect humanity. The combo of a devil and a bleeding heart is fun to watch. However, the anime is very dark, with many bold themes, so it might not be fun for faint-hearted weebs.

This is the story of an ordinary boy Tatsumi who, along with his friends, sets out on a journey to make money. They belong to a financially weak village. After reaching the capital, they face some worst possible scenarios. The group of friends gets separated and killed, except Tatsumi. However, lady luck was quite fond of him, and he was saved by the “Night Raid,” a group of assassins. These assassins are labeled as rebels because they work to eliminate corrupt leaders.

The Night Raid offers Tatsumi to join their group. Having no choice, he joins the group and works with them to eliminate their prime minister. There he meets Akame, the main female lead, and a swordsman. Their chemistry is likable and develops with each passing episode. This one is a genuine anime for a dark fantasy with many events that make you proud while watching it.

Though it’s sad and brutal, with action-packed dark themes, it’s worth the watch. It’s not like there aren’t any weak points and cliches in the plot; there are! Overall, this anime offers much more than one can expect!

The love relationship between vampires and humans has always been charming. Vampire Knight is for all those who seek action-packed, thrilling love stories. It’s a love triangle involving Yuki, Zero, and Kaname. Yuki is a lively girl, Zero is a cool vampire hunter, and Kaname is a gorgeous Vampire. Zero and Yuki work to maintain discipline in their academy, where humans and vampires study on different shifts.

Kaname happens to be the leader of the night shift. Seeing him makes Yuki happy because he saved her life from a vampire attack.

The plot progresses with many mysteries, suspense, action, and romance. Both leading males fall for the same girl, which is how the love triangle attracts many eyes and instills curiosity. You will need to find out with whom Yuki will end up. Therefore, refrain from shipping a specific couple in the beginning.

I enjoyed watching the show initially but ended up being sad after shipping the wrong couple! The animation, fantastical elements, and character development are great. You’ll love the series if you love romance anime! I’ll call it one of the best dark fantasy romance anime.

Yui Komori’s life changes when she enters a house full of Diabolik lovers. The house is full of 6 vampire brothers, and the girl will be their bride. Yui did not want to join them but was forced at her father’s request. The reasons remain a mystery, and fans are forced to become curious fright from the beginning.

Each lover has his way of showing love; one trait is common. However, they are all seen as having some sadistic tendencies, ranging from low to high in scale. Yu’s life is nothing less than hell as she lives a life similar to a hostage. She does not know what trial is coming for her, yet her fate has bound her to stay with them.

Diabolik Lovers’ manga is more popular than its anime, so you can read it if you like reading manga.

P.S. It shows bold themes, including abuse and stuff, so definitely not recommended for kids.

Chise Hatori is a sweet 15-year-old girl whose life was never a bed of roses. As if it was not enough for a young girl, she was soon sold to a mysterious man with a much more mysterious name Elias Ainsworth. For Chise, being sold out was far better than staying in the same hell.

Her life changes for good when Elias reveals himself to be a magus. The girl’s mundane life became a fairy tale full of magic, fairies, and fantasy. The mysteries and little perplexing events will glue you to the end. It’s a smooth anime full of charm and a sweet love story.

The relationship between the main leads develops at a slow pace. Therefore, a little patience is required on your end. You’ll experience a range of emotions, and that’s the best thing one can expect from an anime.

When we talk about the best dark fantasy romance anime, then what’s better than Tokyo Ghoul? It is filled with gore, bloodshed, romance, betrayal, action, and much more! Ken Kaneki has baffled others with his charming personality and badass attitude. Behind every badass character, there is a past that made them like this. The same is the case with Kaneki Ken, whose life hits him hard when her love interest betrays him.

Normal betrayal is hard to cope with, but this was different. Nothing can determine one’s fate, and Ken’s half-ghoul fate was written. The beginning of his life as a ghoul was the worse part. He had to adjust to the norms and body changes. This is what makes it fun to watch!

The anime’s pacing and plot improve slowly but get extremely good in the middle. However, seeing Ken in action and then falling in love with Touka is heartwarming. This is the best recommendation for those looking for dark fantasy romance anime. It has got all you want! Trust me on that!

All of the entities mentioned above are likable and interesting. However, some have more dark themes, and some have light. Depending on your choices and preferences, I added a little variety to the list.

I will love to read if I have got anything near your preferences. If you want recommendations on various topics, let us know. We’re here to fulfill your demands.