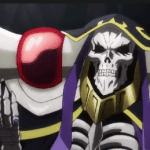 That time I got reincarnated As a Slime, and Overlord both, are great anime that hook the attention of viewers from the start. One is famous for its beautiful characters, whereas the other is known for its ruthless and overpowered MC.

If you have finished both of these and are looking to watch anime similar to Slime and Overlord, sit tight because, in today’s blog, we’ll talk about the top 10 like Overlord and Slime. So without any further ado, let’s get started.

Contents hide
10. Log Horizon
9. No Game, No Life
8. Konosuba
7. Wise Man’s Grandchild
6. Drifters
5. My Isekai Life: I Gained a Second Character Class and Became the Strongest Sage in the World
4. Goblin Slayer
3. Grimgar of Fantasy and Ash
2. Mushoku Tensei: Jobless Reincarnation
1. So I’m a Spider, So What?
Related Posts:

On number 10, we have Log Horizon, an action anime with adventures and fantasy elements. How would you feel if you were forcefully transported inside a game? Some will consider it a dream, while others will consider it a nightmare.

Log Horizon follows a similar storyline. It tells the story of Shiroe, an ordinary high school student who (along with thousands of other players) got stuck inside a famous game called Elder Tale. While everyone was trying to log out of this game, our curious MC who is a mage alone started his journey to unleash the secrets of this new World.

After getting a hold of the situation, Shiroe, along with Naotsugu and Akatsuki, started his journey of building his town. What story awaits him and his friends? Watch the anime to find out.

Next on our list is No Game No Life, a fantastic isekai anime that will brighten your day with its fantasy elements. This anime revolves around the story of two siblings that do nothing except play different online games.

Sora and Shiro are both antisocial kids, and whenever they play an online game, they always choose the username Blank. But when they accepted a challenge from an unknown user, their lives turned upside down.

Upon winning a game of chess, both Sora and Shiro are taken into a game world known as Dishboard, and if they want to survive in this World, they must complete dangerous challenges every day. What are those challenges, and how will the duo face them? Let’s find out by watching this anime.

If you are looking for anime similar to slime and Overlord, No Game No Life is perfect for you.

Konosuba is an adventure, fantasy, and comedy anime that will make your evening fantastic with its parody and reincarnation themes. The anime revolves around the story of Kazuma Satou, a high school guy that met his demise in the worst way ever possible.

I know deaths are always sad and miserable, but in our MCs case, it was the exact opposite. Coming straight to the point, rather than dying, our MC was given two options by a goddess named Aqua. One was to accept his death and go straight to his afterlife; the second was to be isekai’d into a gaming world.

As a gaming enthusiast, our MC immediately accepted the second option and started his new journey in a unique fantasy world. What challenges and adventures await him? Let’s find out by watching this anime.

Wise Man’s Grandchild is an action anime, and what makes this anime a great one is its romance and reincarnation elements. The anime is set in the kingdom of Earlshide, telling us the story of a national hero named Merlin Wolford. Wolford is an OP MC just as in Overlord, so that is a ton of fun.

In his prime, he did everything he could to defend the city, but now, he has grown old. He only wants to live a peaceful life. So he adopted an orphan kid named Shin and started living in the woods. Now comes the fun part; Shin is a Japanese guy who died in his real World and is reincarnated in this World as a kid.

Moreover, Shin still has all of his previous life memories (the plot keeps getting interesting). What life awaits Shin? I can’t tell you that, but I assure you it will be interesting.

Next on our list for anime like Overlord and slime, we have Drifters, a great action/fantasy anime renowned for its badass and ruthless MC. It tells the story of Toyohisa Shimasu, a mighty warrior with no weakness.

He fought many wars and always tried his best to protect others. One day, while fighting, he became seriously injured but still protected his comrades till his last breath. Everything changed when he was about to meet his demise, and nature granted him another chance to live by reincarnating him in a fantasy world.

He is reincarnated in this World as a Drifter and has been given the responsibility to fight against Ends (people trying to escape this World and disturb the peace). Our MC is a true warrior, and fighting never ends for him. If you like watching action anime, then this anime is just for you.

5. My Isekai Life: I Gained a Second Character Class and Became the Strongest Sage in the World

My Isekai Life: I Gained a Second Character Class and Became the Strongest Sage in the World is an action, fantasy, and adventure anime with perfectly blended isekai elements. It tells the exciting story of Yuuji Sano, a hardworking guy who died from overworking.

Don’t get sad yet; instead of dying, our MC was reincarnated into a game-like world as an adventurer. This time, he wished to live an ordinary life, but with his Monster Tamer (one of the weakest) title, it’s not possible yet. He may look fragile, but he can produce slimes.

The slimes are pretty powerful; with them, no one can stop our MC from powering up his magical abilities and becoming a sage. My Isekai Life and That time I got reincarnated As a Slime has a lot in common, so if you are looking for anime similar to slime, go for this one. You’ll love it.

Next, we have Goblin Slayer, one of the most popular action anime. The story is set in a world where Goblins, also known as low-level monsters, are becoming a threat to society. They attack the villages, kidnap females and use them for breeding purposes.

They roam freely, and there is no one to stop them. However, the story takes a huge turn when our MC, known as Goblin Slayer, is introduced. Because of some unpleasant prior encounters with goblins, our MC grew up solely wanting to wipe them off the face of the planet.

He formed a guild with Priestess, High Elf Archer, Dwarf Shaman, and Lizard Priest, and together, they started their journey to hunt Goblins and take on the most dangerous of adventures. Goblin Slayer is not just an ordinary anime; It is dark and full of things that show you just how hard it would be to live in a world full of swords, magic, and monsters.

3. Grimgar of Fantasy and Ash

On number 3, we have Grimgar of Fantasy and Ash, an action, adventure, and fantasy anime ideal for those looking for anime similar to slime and Overlord. If you have always wished to be reincarnated in a world, this anime will turn your wish into a nightmare.

The story revolves around a group of ordinary people transported into an unknown fantasy world. They all were abruptly transported into this World and were forced to fight. Their only memory is of their name.

To survive in this World, everyone must abandon their feelings and turn themselves into a ruthless character, or they will die. Grimar shares an exciting and thrilling plot, so if you are into that, don’t forget to watch this one.

Mushoku Tensei: Jobless Reincarnation is a fantasy/drama anime, and what makes this anime extremely interesting is its isekai and ecchi elements. The story revolves around a good-for-nothing guy who has been bullied his entire life. As a result, he lived a miserable life, and even his death was filled with tragedy.

As he died heroically, nature granted him another chance to live his life by reincarnating him as Rudeus Greyrat, a newborn child. In this World, he got everything he desired, and to make things more interesting, the writer did not erase his memories.

Rudeus may look like a child, but his brain is as mature as an adult. Using his past experiences, he read various books to learn magical skills, and in no time, he became a powerful fighter and a magician. Redeus’ journey is filled with exciting adventures, and if you like anime with adventurous themes, this one is for you.

On number 1, we have So I’m a Spider, So What? a perfect action/adventure anime that will cheer up your mood with its humorous plot. It was just an ordinary day, everyone was studying peacefully in their school, but suddenly a catastrophe struck the school and turned everything into dust.

Everyone died but luckily, some of the students were reincarnated in an unknown game world. Everyone except the MC was reincarnated as noble and was given exceptional skills. Unfortunately, our poor MC, Kumoko, was reincarnated as a spider, and, to add more to the ongoing situation, she was given zero skills and abilities. However, our MC gains skills fast and effectively.

Now the question rising here is, how will our helpless MC survive in this World? If you want an answer to that, then you have to watch this anime. Moreover, if you are looking for anime like Slime and Overlord, don’t forget to watch this one.