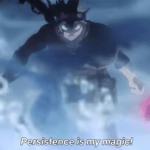 It’s not much fun if the graphics of the anime aren’t good enough. Alternatively, anime with the best graphics adds more charm to the story, and the viewer can’t stop watching. I bet we have binge-watched much anime for their quality animation and have stopped many for their poor animation. Isn’t that right? Today, I’ll recommend the best anime with the best Graphics I know! Let’s begin the list.

Black Clover is the anime that made a huge noise because of the story, action, and neatest graphics. The graphics are likable, and there is much to look for in anime. It’s a kind of typical shounen with infinite fights. The first thirty episodes are a bit slow-paced, but it keeps getting better and better after that.

The story is of a kid named Asta who vows to become the best wizard king despite lacking an essential thing, “Mana.” His passion makes his way, and he gets a five-leaf grimoire (magic book), a unique one. They say if you want something intensely, the Universe makes way for it! The same goes for Asta, who begins his journey toward being the best wizard king.

The story seems somewhat similar to Naruto and Bleach, but it’s entertaining. Like Naruto had a nine-tailed fox, Asta had a demon inside his grimoire. Their chemistry, action, humor, twists, and turns make the show worth watching.

As the name suggests, Fire Force focuses on the lives of people whose bodies can catch fire without any known reasons. A Fire Force includes gifted people who control their fire and mold it the way they want. These gifted ones are termed Pyrokinetic and gain skills related to fire. On the contrary, some Infernals can’t control after catching fire.

They become violent and are dangerous to be set free. Many forces are working to find the reason behind people turning into infernals. This is a mystery! The plot gets intriguing and more fun with each passing event; it’s soothing to see the action of Pyrokinetic.

The fire ability makes the action unique. Shinra Kusakabe is the main character who joins the fire force intending to save humanity by resting the infernals in peace. However, after joining the company, he learns things are not as simple as they seem. Other companies are working for their motives.

Shinra is feared as a devil, and there is a backstory. The funny thing is that his smile makes him look like a devil. He doesn’t make that face deliberately, but whenever he is nervous, he unconsciously makes a face.

I am sure you will love Shinra’s character because he adds humor to the show. The story has a lot of suspense; the anime gets the best when it opens. There is action, teamwork, and a lot more to look for. Animation is always top-notch, so undoubtedly, you will fall for its style. So have a good time watching!

This one highlights the not-so-ordinary life of an ordinary teenager named Shinichi Izumi. He usually lived until the aliens called Parasites entered the earth. Like any other typical fantasy, aliens in this one also tried to rule over the human world. However, their way of doing so was different and kind of creepy as well. Many parasites start residing inside humans after getting into their bodies. The plan was to control their minds.

Shinichi was lucky enough that the Parasyte couldn’t reach his mind but became part of his right hand. In contrast to others, he had conscious control over his mind and body. The parasite in his hand became his buddy. The duo decides to fight the others to save humanity. The bond between the duo, the action, and the graphics is phenomenal.

Its fans love this, and if you watch it, you’ll realize why people love watching this anime. The story is wacky, and the pacing is perfect. The bond between the parasite and Shinichi isn’t typical and is kind of weird but fun at the same time. Their chemistry makes the anime enjoyable. AND yes, this is one of the best anime with the great graphics!

Sorcery and action is a deadly combo, and JJk has just taken it to another level. All the anime characters have a different fan base, and one can’t stop admiring them all. The animation quality makes everything about the anime captivating.

Yuji Itadori’s life drastically turns after his grandpa’s death. His friends find a Talisman and decide to open it. To stop them, a sorcerer Megumi Fuhsiguro gets into action. Yuji’s friend opens it and welcomes cursed energies, and action occurs between Megumi and the evil monsters.

The fight becomes a little tough for Megumi, and without a second thought, Yuji jumps into the fight to help him. Inside the talisman was a finger, and during the fight, Yui ended up engulfing the finger. It was Ryomen Sukuna’s finger; he is the king of curses. Fortunately or unfortunately, Yuji becomes the vessel of the king of Curses. Sukuna has been REBORN!

Now things have become a little complicated. Gojo Satoru, Megumi’s sensei, enters the scene, decides to train Yuji, and teaches him Jujutsu. The fights get better and the character development also gets better with the progress of the story. This is the best action anime with good graphics.

Spy X Family has been record-breaking and has broken the record of many top-class series on Netflix. It is simply GOAT! There is an action comedy and unlimited entertainment. But it’s the anime with the best graphics and plot line.

Loid works to gather some information and has a secret mission. To accomplish his mission, he takes the help of a woman named Yor and Anya, a six-year-old girl. Willingly or unwillingly, he had to make a fake family, where Yor acts as his wife and Anya as their daughter. However, the best part is that everyone has a secret they keep and pretends to be what they are not.

Yor isn’t an ordinary woman but an assassin, while the kid can read minds. At some events, viewers can’t control their waves of laughter, and it’s super fun to see this fake family stand up for each other. It’s not a typical action comedy show, so if you want to see something new, please don’t miss this masterpiece. The bond of the trio and the way they deal with problems is magnificent.

Attack On Titan is another crazy anime with spectacular animation. The thrill it creates is overwhelming. AOT is set in a world where humans live with the fear of Titans. They are giants, and apparently, humans can do nothing against them.

The story’s star is Eren Yeager, a fearsome person with a sad past. His life became worse than hell when he witnessed his mother’s butchery at the titans’ hands. He starts as weak but with the story’s progress becomes the strongest.

Though the military team tried their best against the powerful and beastly titans, they were nothing. But then, the story starts getting mind-blowing with the epic twists and turns. During a fight, Eren becomes the food of a titan, but that is the moment that steals the show. Eren transformed himself into a titan, and we learned that there is so much to the story still to be known.

After Eren, the transforming titans keep on coming. The saddest part is Eren turns from being a protagonist to the antagonist. The harsh realities and painful truths play a significant role in making him the way he is now. The anime fandom has a massive debate about him doing right or wrong.

If one views things from his perspective, one is forced to agree with his actions. Therefore, the anime will impact your perspective of viewing items. It will give you a new angle, which is the anime’s beauty.

The suspense, the curiosity, and the action are simply on point. AOT has been the record-breaking anime, and if you still haven’t watched it, then dude, you watched nothing! The anime sure took its time to be the best but trust me, bro, it’s worth the watch!

Demon Slayer has been one of the best anime and is promising enough to keep winning hearts with its coming seasons. Its animation has been rocking from the start, and all DS fans agree it has a God-level animation!

Demon Slayer stages the life of Tanjiro Kamado, an innocent boy with an unexpected fate. He works his best to look after his beautiful family. However, one day when he returned, he found all his family members had died from a demon attack. He could hardly breathe seeing the scenario. Only his sister was alive, but sadly she turned into a half-demon. Tanjiro ran along with his sister and encountered a demon slayer on his way.

After some action, the demon slayer decides to help the boy and sends him to an ex-Hashira. There Tanjiro trains day and night, pass each task and becomes a better version of himself. Finally, he becomes one of the best Demon Slayers and vows to avenge his family’s death.

From here onwards begins the journey of Tanjiro fighting the demons and finding ways to turn Nezuko back to being human. The animation is super lit and the best in the anime world. One can’t refrain oneself from giving 10/10 points. The anime is full of multiple emotions; it starts with a sad note though it is surely a roller coaster ride of emotions.

Conclusion on anime with amazing graphics

This was it for today, my lovely fellas! I tried to mention anime with different genres having good visuals. Not one but more; I can bet that you will become a fan of them once you give them a try. If you have already watched any of them, don’t forget to mention them in the comments below. I love to hear from you!